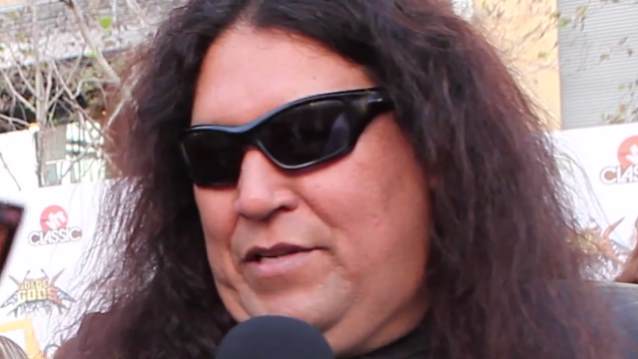 Jo Schüftan of Horns Up Rocks! conducted an interview with vocalist Chuck Billy of San Francisco Bay Area metallers TESTAMENT on the "black carpet" of this year's Revolver Golden Gods awards on April 23 at Club Nokia in Los Angeles, California. You can now watch the chat below.

On the return of bassist Steve DiGiorgio, who was previously a member of TESTAMENT on "The Gathering" (1999) and "First Strike Still Deadly" (2001) albums:

Chuck: "Steve went to Australia and Japan with us, and it was awesome. He stepped right back in. I wasn't sure if he knew all the stuff, and he stepped in with every song. There wasn't a song that we couldn't play; he remembered it all. And I'm glad he's back. I think he's gonna add a lot to the new TESTAMENT record that comes out. We're working on that right now. It should be out early next year."

On how the next TESTAMENT album is shaping up:

Chuck: "I never know what the final product is gonna be on any record we do — they all seem to be different — but I would love it if it kind of went back to what we did with [1999's] 'The Gathering'. Something about that record, to me, hit a nerve with new fans and fans in general. So I think if we could take that, what we were, especially with Steve being back, and that's the album Steve was on with us, go back to that style of writing and performing… But who knows?! We're in the early stages [of the writing process]. Eric [Peterson, guitar] just finished up the [new album from his side project] DRAGONLORD, and then we're just slowly getting into the [writing process for the next] TESTAMENT record."

TESTAMENT in January announced the departure of bassist Greg Christian.

In a recent interview with 100PercentRock.com, Chuck Billy stated about Christian's latest departure from the band: "Well, I think Greg, he informed us that he wasn't going to be participating on the new record release and that was his last tour with us. We knew we had Australia coming up, so, of course, Steve DiGiorgio was probably one of the first ones to come to mind. He did 'The Gathering' record with us and we enjoyed that whole cycle of touring, so he was definitely, probably, our first choice. We didn't want to go through auditions and do all that. We just knew that he was here, and he could do it, and it was killer."