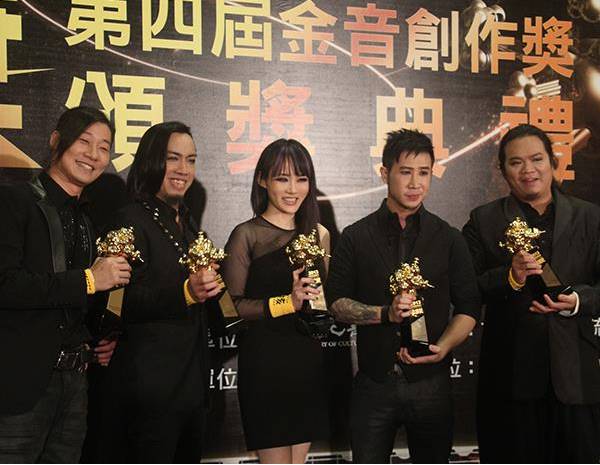 With the most number of nominations, Taiwanese metallers CHTHONIC were honored in the "Best Rock Album" and "Best Band" categories while the band's guitarist, Jesse Liu, won the "Best Musician" award at Taiwan's Golden Music Awards ceremony hosted by Taiwan's Ministry Of Culture and broadcast live by Azio TV this past Saturday, October 26 in Taipei.

Jesse thanked his fellow band members and the judges, while band leader Doris Yeh also thanked her partners for supporting each other along the way when accepting the "Best Band" award. Doris said that it takes a lot of hard work to tour around the world, "if not for the support that we give each other in the band, it would be hard for us to achieve this together." When accepting the "Best Rock Album" award, lead vocalist Freddy Lim gave his thanks every one who participated in the production of the album, including Wu Hsiung, Tang Mei-yun, Chen Ming-chang, Tsai Chen-nan, and Möbius Theatre. "We've completed this very challenging yet very interesting album together," he said. He then dedicated the album to Ng Chiau-tong, the late chairman of the World United Formosans For Independence who passed away two years ago. "We miss your charming smile a lot," he said.

Speaking to the media backstage, the CHTHONIC members continued to express their gratitude to their families, their team, and fans. "Whether you are in Taiwan or elsewhere, the CHTHONIC team and fans are just like a big global family, we are truly thankful of all our partners," they said.

Video footage of the award ceremony can be seen below.

CHTHONIC's seventh album, "Bú-Tik", was released in North America via Spinefarm Records in the U.S. digitally on June 18 and on CD on June 25. The effort was recorded at Sweden's Sweetspot Studio by producer Rickard Bengtsson, who also worked on 2011's critically lauded "Takasago Army" full-length.