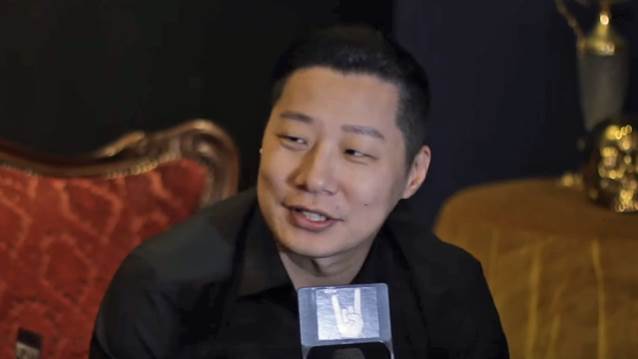 Australia's Heavy TV recently conducted an interview with frontman Freddy Lim of Taiwanese metallers CHTHONIC, who also is a part of Taiwan's parliament. You can watch the entire chat below. A few excerpts follow (transcribed by BLABBERMOUTH.NET).

Freddy: "In the beginning, the band CHTHONIC was formed in 1996. Back at that time, I was in my second term at a university. I was very into death metal and black metal. Black metal was quite new in 1996, so I got quite a lot of influences from the Scandinavian bands. I started to think. I had played in many bands when I was in high school, but I didn't really make my decision on what kind of genre I wanted to play. I played in some bands doing covers of GUNS N' ROSES and some bands covered some thrash metal bands. When I started to listen to all these extreme metal bands from Europe, from Scandinavian countries, then I started to think, 'Wow, I really like that kind of music. I like all those symphonic black metal bands.' Then, I feel I have this kind of emotion with me as well in Taiwan. I want to express my anger or sadness in Taiwan. There is a rich history and mythology in Taiwan, Taiwanese aboriginal tribes as well. I have the same kind of inspirations and feelings. That's when I made the decision to play this kind of music. Over ten years, we improved our styles and more into Taiwanese styles to mix with Taiwanese things, but at the same time, there has been so many different movements happening in Taiwan as well. Along with the progress of the bands, improving the music, but on the other hand, we have been participating with different movements, which means that there are two things happening at the same time. One is how should I write my own metal? The other thing is what is a better society? How can I get involved in the society to make things better? Things going on at the same time, so, I think the band was getting bigger, but at the same time, the more I got involved in public affairs. But, actually, I separate these two things. I make these two things separate. I didn't really write music based on political messages and I didn't try to play my music in the political [sphere] either. Metal is not that kind of music. [Laughs] The crowds cannot understand what's going on. If I'm a rapper, maybe I can do that. If I play folk music, maybe we can do that. In metal, come on. The elders and so many scholars and activists, nowadays, there are more and more people into metal now, but back in the '90s, nobody understood why we played metal in these campaigns, in these activities. So, I try to manage these two things separately. Metal, when I write music, I just concentrate on how to write good metal music and don't think in political [terms]."

On the therapeutic element of metal music:

Freddy: "I think sometimes the people, or the people who don't listen to metal, they just misunderstand what we are doing. They thought that the metalheads are crazy, but actually, I think metal is a style of music that can express your emotions and make you more calm in ordinary days. It makes you mentally healthier. Of course, we like to bang our heads, we like to mosh, it's like a sport. It's a release for our emotions, but on the other hand, there are so many strong messages in all of these metal bands, all kinds of messages. Some messages, maybe there are some wrong messages as well, but the people, I know so many metalheads that love to research information about those messages. I know so many metalheads who know more about Scandinavian culture, history because they love all of those Scandinavian black metal bands. So many metalheads want to learn more about those messages, like myself. I can't really analyze why I became so political, but I know when I was in high school, I tried to think and learn more about the lyrics of MEGADETH and ANTHRAX and all those thrash metal bands and tried to debate with myself what they are talking about. What are those messages about? So, that's something those people who are not metalheads may not understand or acknowledge."

On being tagged as the "BLACK SABBATH of Asia":

Freddy: "[Laughs] I like Ozzy [Osbourne], I like BLACK SABBATH. But, the general [details] between us are quite different."

CHTHONIC's most recent release was last year's "Souls Of The Revolution" EP. The title track featured a guest appearance by LAMB OF GOD singer Randy Blythe. The track was described as the "theme song" of CHTHONIC's Taiwanese action-comedy "Tshiong", which received a Taiwanese premiere last December. The movie, which stars Blythe, was directed by Wen-Tang Cheng, who has previously produced a number of documentary, short and feature films.

On January 16, 2016, Lim was elected as a member of the Taiwanese parliament, making him the first metal star to become a parliamentarian. The new political party that he co-founded, the New Power Party (NPP), won five seats and became the third largest party in Taiwan's national legislature. Now he is vice president of the Taiwan-USA Inter-Parliamentary Amity Association and chairman of Taiwan Parliament for Tibet.