According to a program description by LAMB OF GOD drummer Chris Adler's cable provider or TiVo programmer, tonight's episode of the "Jimmy Kimmel Live!" talk show will feature a musical performance by the "Christian heavy metal band" LAMB OF GOD. Adler shared the amusing image on his Facebook page along with the caption: "So..., will you be watching? ‪#‎LambOfGod‬ on ‪#‎JimmyKimmel‬ TONIGHT (Thursday)."

LAMB OF GOD was previously banned from performing at the Forum in Inglewood, California (which is owned by the Faithful Central Bible Church) due to an unusual offense: their former band name.

"We used to be called BURN THE PRIEST," LAMB OF GOD singer Randy Blythe explained in 2005 interview. "We changed our name, because we didn't want to be lumped as just a generic satanic metal band, because we don't sing about the devil or anything. The name is pretty harsh. We didn't feel the name represented what we were about, so we changed it."

He continued: "The people that own the Forum are a large church. Some of their congregates, I suppose, were not too fond of our former moniker. They own the place, so it's their right not to have us there. But I think they're being very closed-minded and small-minded. They obviously haven't done any research. They don't know what we're about. That's their deal." 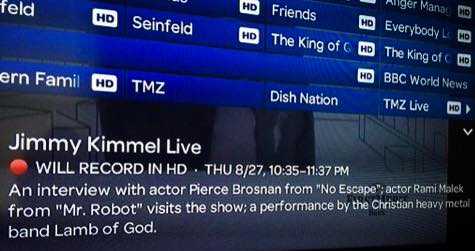 So..., will you be watching? #LambOfGod on #JimmyKimmel TONIGHT (Thursday).