A 35-second video teaser for the CHRIST INVERSION debut can be viewed below.

Formed in 1994, CHRIST INVERSION was a short lived black/death metal project formed by Anton Crowley (a.k.a. Philip Anselmo). Most of their lyrics were based on horror films and Satanism. The band recorded two demos and then disbanded without ever recording a full-length album. The first demo, "Obey The Will Of Hell", was re-released in 2004 by Funeral in Hell Records. On MySpace the band describes its sound as "the venomous vomit of Satan!" and cites its influences as VENOM, CELTIC FROST and Satan. 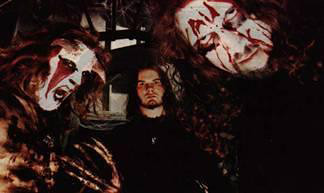