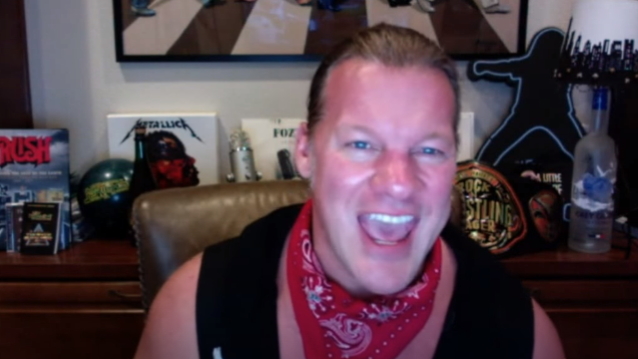 In honor of QUIET RIOT drummer Frankie Banali, who passed away earlier this week, FOZZY frontman Chris Jericho sang an a cappella version of QUIET RIOT's "Metal Health" during last night's (August 22) episode of "Saturday Night Special", Jericho's weekly live series which airs on his YouTube channel and Facebook page. Check out video of his rendition below.

On Friday (Auust 21), Jericho paid tribute to Banali in an Instagram post, writing: "Sorry to hear about the passing of #FrankieBanali, one of the greatest rock drummers of the 80s w @quietriotband & #WASP. I had the pleasure of having him and his old band mate and my brother @sarzo.rudy on #TalkIsJericho about 5 years ago...he was a great guest and an amazing storyteller. Rest well Frankie and say hi to Kevin & Randy for us...."

Frankie was diagnosed with stage IV pancreatic cancer on April 17, 2019 and given six months to live. He put up an inspiringly brave and courageous 16-month battle to the end and continued playing live as long as he could. Standard chemotherapy stopped working and a series of strokes made the continuation on a clinical trial impossible. He ultimately lost the fight at 7:18 p.m. on August 20 in Los Angeles surrounded by his wife and daughter. He was 68 years old.

Banali was diagnosed with pancreatic cancer after going to the emergency room for shortness of breath, leg pain and loss of energy. A scan of his lungs caught an image of his liver, which is where the first spots were seen. Then came the discovery of a tumor on his pancreas.

He had been in treatment since the spring of last year and recently completed his 21st round of chemotherapy with the hopes of shrinking or controlling the cancer.