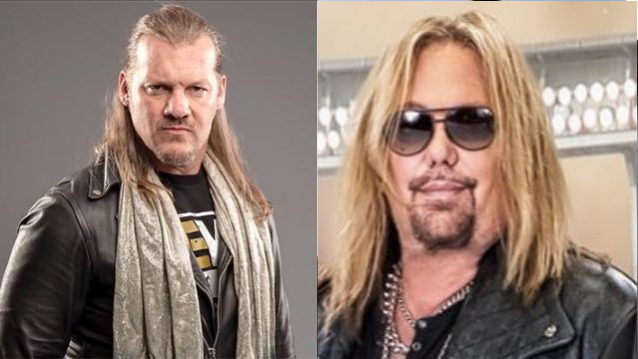 FOZZY's Chris Jericho has weighed in on Vince Neil's disastrous comeback performance at an Iowa festival less than two months ago.

On May 29, the MÖTLEY CRÜE singer struggled to complete his solo concert at the Boone Iowa River Valley Festival in Boone. Based on fan-filmed video footage of the gig posted on YouTube, the 60-year-old rocker, who hadn't performed in more than a year and a half due to the COVID-19 pandemic, began losing his voice several songs into his set, which consisted exclusively of CRÜE classics and cover songs previously recorded by the band.

Jericho discussed Neil's return to the stage during a brand new interview with "Loudwire Nights". Asked how he felt after seeing the footage of Vince's gig, Chris said (as transcribed by BLABBERMOUTH.NET): "It's disappointing because I think everyone is pulling for Vince and they're pulling for MÖTLEY CRÜE. And it's gonna be tough doing ['The Stadium Tour' in 2022 with DEF LEPPARD, POISON and JOAN JETT & THE BLACKHEARTS] because Joan Jett, I don't know if you've seen her recently, she's freakin' awesome. And Bret Michaels — I was just talking about POISON the other day; they're gonna steal the show. You'd better watch out for POISON, 'cause Bret Michaels is the best frontman out of all of those bands. And then DEF LEPPARD's DEF LEPPARD; they do what they do. And MÖTLEY CRÜE, they're gonna have to really step it up.

"I'm disappointed to see Vince the way he is, because I think if he lost some weight and did some training and came out there and was in some semblance of shape, a) his voice will sound better just from that alone, and b) people would go, 'Holy shit! Did you see Vince Neil? He looks great.'

"I think if he really wants to do it, he could do it," Jericho continued. "But I don't know if he does. And that's the thing. And it's up to him. And either way, it's MÖTLEY CRÜE — people are gonna go, and they're gonna love it. But to me, as a performer, I would take that as a challenge: 'I've got one year. Let's do this. It's been long enough. Let's do this for real. Let me call Phil Collen and Duff McKagan and other rock guys that have got themselves into great shape: 'How did you do it?'' And really follow up. It's great to have dieticians and stuff, but I would call Duff McKagan, a guy who is in wicked shape because his pancreas blew up and he almost died. That's what I would start doing. 'Let me start thinking how these other rock guys that we've partied with for years, and now they're super physical and they're the same age as me and the same mindset of being a rock and roll guy. How do you do it?' I think he could do it, but he has to want it. And I think, as a fan, it would be one of the greatest feel-good stories — no pun intended — in rock and roll history if Vince came out there and just looked like a killer and was, like, 'All right, mother-effers' [extends middle fingers of both hands] — I did.'"