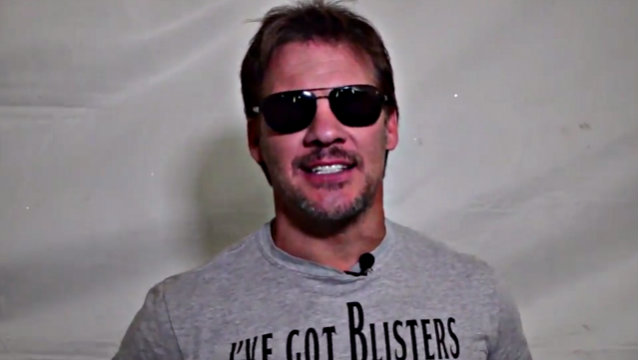 James Geiser of Antihero Magazine conducted an interview with FOZZY frontman Chris Jericho at this year's edition of the Carolina Rebellion festival, which was held May 5-7 at Rock City Campgrounds at Charlotte Motor Speedway in Concord, North Carolina. You can watch the full chat below. A few excerpts follow (transcribed by BLABBERMOUTH.NET).

On the success of the "Judas" single, which is also the title track of the band's forthcoming new album:

Chris: "We've had successful songs in the past, but 'Judas' is nothing we've ever experienced before. Right out of the gate, people just embraced it. The video is very cool; the song is so hooky and so catchy. Here we are, only three or four days later, the video is already at three-quarter of a million views, the single is number one in Saudi Arabia and Portugal, places we've never been before. On Twitter, Facebook, everything is 'Judas', 'Judas', 'Judas', 'Judas', 'Judas', 'Judas'. To us, it's one of those things that because we've been doing this for a long time, there's a lot of goodwill built up toward FOZZY. Now that we have this great song and this great timing, people are really embracing the band. We feel we're on the verge of going to the next level in a big, big way. It's exciting."

Chris: "We just didn't quit. We never broke up. We continued to improve. We continued to build. I think it took a while for a lot of people to get over Jericho as the wrestler, because all that matters is that it's good music or not. Time and time again, we deliver good music and great live shows. I think there's only so long that people can ignore our band if they've never heard us, so when they check us out, automatically they're fans. I always say we have to work twice as hard to get people's respect. But once we get it, we've got them for life. That's good. We earn everything we have and that's the way we want it."

On finding the balance between his career as a WWE wrestler and FOZZY:

Chris: "You just don't do both at the same time. There's a window for one, so when that one ends… we knew we weren't doing anything with FOZZY for 2016, so I went back to the WWE. I knew the whole time that 'Judas' was coming out in May and we were touring so that was the end of WWE in April. Nothing can change that. FOZZY is the priority. We can't tour all the years and we don't want to, so we go back and forth. As long as I still enjoy doing it, why not?"

On his chances of becoming the first person to be inducted into the WWE Hall Of Fame and the Rock And Roll Hall Of Fame:

Chris: "It's something to think about. If nothing else, when I was a kid, I wanted to be in a rock and roll band and I wanted to be a wrestler. That's what I did. I might be the only that ever did both at a high level and that's great. Like I said, I'm very proud of that fact. It was a lot of hard work. I took a chance and I didn't listen to anybody that told me I couldn't do it. If you didn't think I could do it, I didn't care and here we are. It just shows that if you want to do something, you can make it happen, but you have to believe in yourself and believe in your ability and that's what I did. Everything we get with FOZZY, every step up the ladder is huge for me because we've earned it."

On separating his wrestler and musical personas:

Chris: "I think for some people, it's really hard. I was talking to [THE PRETY RECKLESS frontwoman] Taylor Momsen the other day and I feel like a kindred spirit with her. We were talking, when people first saw our band, they thought I was going to be onstage doing body slams and jumping off the top rope. She was like, 'Yeah, people thought I was going to come on stage wearing the elf costume being Cindy Lou Who [from 'How The Grinch Stole Christmas']. And people at first scoff at you: 'Jericho is in a band?' I don't give a shit. Come see our band, we'll see what you think and that's what happens. We wouldn't be doing this if it wasn't good. Like I said, it's either good music or it's bad music. I know for sure people used to laugh at KISS, people used to laugh at SLIPKNOT because they wore masks. Guess what? Now it's iconic. That's kind of the same thing. Every band has some kind of gimmick or at least they should. Okay, FOZZY's gimmick is that Jericho is in the band and he's a wrestler, too. Bruce Dickinson is an airline pilot. I don't listen to IRON MAIDEN records hoping that he sings about small bags of peanuts and sitting in the middle seat in coach. Vice versa, when Bruce is flying the plane, I don't expect him to be singing 'Run To The Hills'. I want him to fly the fucking plane and make sure I land okay. So you keep both things separate. Respect both and understand that one really doesn't have a lot to do with each other, other than it's me involved."

The "Judas" album will be released in September via Century Media.