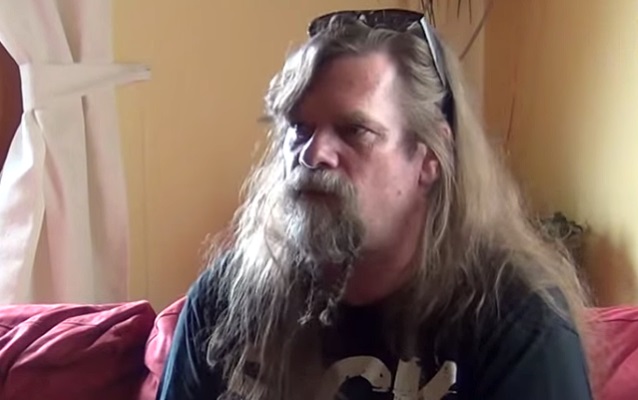 Finland's Seiska TV conducted an interview with former W.A.S.P. guitarist Chris Holmes earlier this year while Holmes was spending time in the country performing select gigs with local rock musicians. You can now watch the chat below.

On what he was doing in Finland:

Holmes: "We know somebody over here [Domino from the Finnish hard rock band BATON ROGUE MORGUE] that plays in a group, and I wanted to come over and play with him. Plus… How can I say? The music scene in L.A. is kind of declining — the rock music scene. It's turning into hip hop. And over here, the hip-hop scene isn't that big, and I wanna play the music I like to do. Plus, my first and second records went gold or platinum here. So, would it be smart to come here?"

Holmes: "[Sarcastically] A good friend, a dear person I started out W.A.S.P. with, who produced the albums, who's the singer. His name's Blackie Lawless, [or] Steve Duren. [He] wrote me down in the contracts on every album as a session player, which means that my name shouldn't even be on the records as a songwriter. But it is, 'cause I'm a songwriter. But he wrote me down as a session player, meaning I just got paid salary."

On whether he would ever rejoin W.A.S.P. if asked:

Holmes: "Never say never. Never say never. You know?! I'm half of W.A.S.P.; I was half of the situation. Even though I am not the voice [of the band], or whatever, I was the driving force of that thing."

Holmes last year released a solo album called "Nothing To Lose". Chris composed, performed, and produced the music and vocals, and teamed up with former MOTÖRHEAD drummer Phil "Philthy Animal" Taylor to perform on and engineer the effort. A follow-up CD, "Shitting Bricks", has already been recorded but has not yet been mixed.