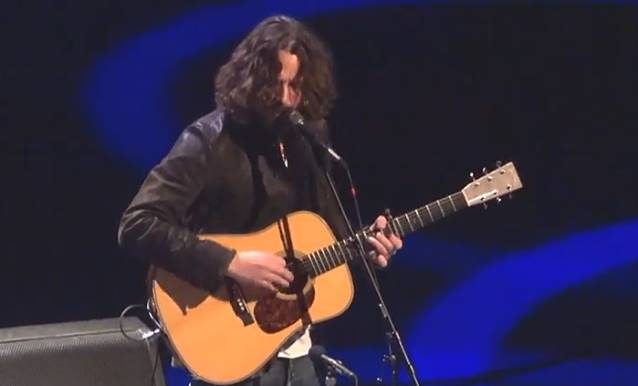 An audio recording of SOUNDGARDEN frontman Chris Cornell's mash-up song of METALLICA's "One" and U2's tune of the same name — taped on October 15 at Balboa Theater in San Diego, California during the singer's "Songbook" tour — can be streamed in the YouTube clip below. The stripped down rendition saw Cornell offering up James Hetfield's lyrics but setting them to the music and style of U2's "One".

Cornell's current "Songbook" shows highlight songs from throughout his career.

This is the first time North American fans are getting to hear acoustic arrangements of songs from 2012's critically acclaimed "King Animal", SOUNDGARDEN's first new studio album in over 16 years.

For a complete list of tour dates, visit ChrisCornell.com.

Cornell has issued three solo albums. The last one, 2009's "Scream", was trashed by critics and fans for abandoning Cornell's rock roots for an urban pop sound.