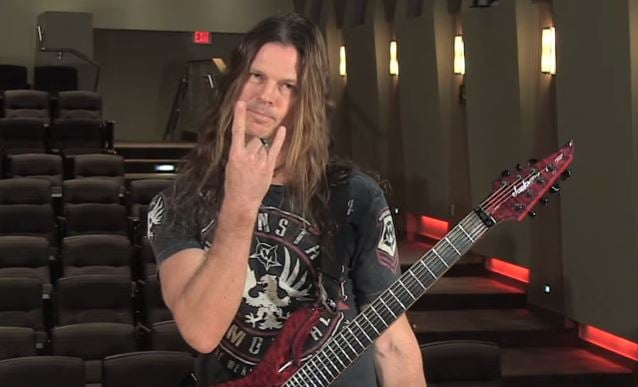 During an interview with SiriusXM's Jose Mangin on last night's (Wednesday, December 17) edition of Liquid Metal's "666-LIVE" call-in show, former MEGADETH guitarist Chris Broderick spoke for the first time about his decision to leave the band and revealed the initial details of a new project that he has launched with another former MEGADETH member, drummer Shawn Drover. A few excerpts from the chat were transcribed by BLABBERMOUTH.NET and follow below.

On why he left MEGADETH:

Chris: "Well, it's not gonna be as exciting as anybody would want. It's not gonna be some huge drama thing or anything like that. It was simply time [for me to leave]. I'd been in [MEGADETH] for seven years and I really wanted to just be able to have that kind of creative freedom to write anything I wanted to, to go anywhere with it that I wanted to and just kind of direct my own course.

"The way I kind of think of it is it's kind of not unlike a chef that works at a restaurant that decides that he wants to open up his own restaurant or maybe a lawyer that wants to start his own firm or something like that. It was a great time to move on. And I think, talking with Shawn, Shawn was in the exact same place. We had talked about it and we had thought about it for a little bit. And so when Shawn quit [on November 25], it was, like, 'Whoah! What happened?' I mean, I knew that we had talked about it, but he did it; he actually just left the band…

"[Shawn and I] talk all the time, and so I knew that he had thought about it and I had been thinking about it. But as soon as he quit, I knew he had made the right decision. Because MEGADETH is going to be ramping up for their next CD recording cycle, and if you've got trepidation about being a part of something, you don't wanna commit to that process, the writing process, and then bail on 'em. And so when Shawn quit, that instantly became clear to me. So I talked to [David] Ellefson [MEGADETH bassist] and then I went and I talked to Jackson Guitars, my endorsement, and Fractal Audio Systems, and they were all so supportive. They were, like, 'Dude, we've got your back. You do what you've gotta do.' So I decided that night after Shawn did it, I was, like, 'It is the right time,' because MEGADETH is getting ready to move into their next recording cycle. I mean, if there is a good time to leave, that was it."

On the reaction from Dave when Chris told him he was leaving MEGADETH:

Chris: "He was definitely disappointed. It was, obviously… It's not something that he wanted to hear or anything like that. The one thing that you wanna know is, in a way, we were hired guns, so…"

On whether he thought he was gonna be part of MEGADETH for a long time when he first joined the band:

Chris: "When I first started, I didn't know what to expect. You're going into something with fresh eyes and fresh ears, and you're just going for it. And it was great, it was awesome, it was great for my career. I got to play 'Big Four' shows [with METALLICA, SLAYER and ANTHRAX], I played across the world, it was an awesome thing at the time. But there comes to be a point where I'm, like, I wanna be musically creative for me, and that's really where I wanted to go."

On his musical future:

Chris: "Well, one of the things that I've always wanted to do is a solo CD, so I'm definitely gonna be working on that in 2015. But one of the things that I've really recently become very excited about is, through talking with Shawn Drover, we've talked about how we had all this material that was never gonna get released, all these killer, heavy riffs that we had written and stuff, and so we just decided, 'Hey, why don't we put the stuff out? Why don't we form a band and get out these killer riffs, just to see what people think?' So we formed a band, we're working with a killer singer — he's awesome — and we've got record labels that have made some good offers on the table, and we're really excited about where that's gonna go."

On whether the new band has a name:

Chris: "Here's the funny thing: we have many names. But the problem today is that there are so many bands out there that the first thing we've gotta do is run them by trademark and make sure that we can get… We don't wanna run into the 'GHOST' and the 'GHOST B.C.' issue, right?! So we're looking into trademarks on the names, and I would love to tell you, but we wanna save some of it for our official press release, and we'll talk about the singer then, and we'll have the record label on board by then."

On whether the musical ideas that are being used in the new band are things that were originally presented to MEGADETH and were turned down or if they are brand new compositions:

Chris: "Some of them were presented, but then some of them also… I'd be, like, 'Oh, this isn't appropriate for MEGADETH, their sound.' I have a tendency to write very complex stuff, and so I've gotta watch it when I write and submit for MEGADETH under that kind of… I wanna make sure it's not too complex and too crazy and all over the place. So those are the things that I would have held back."