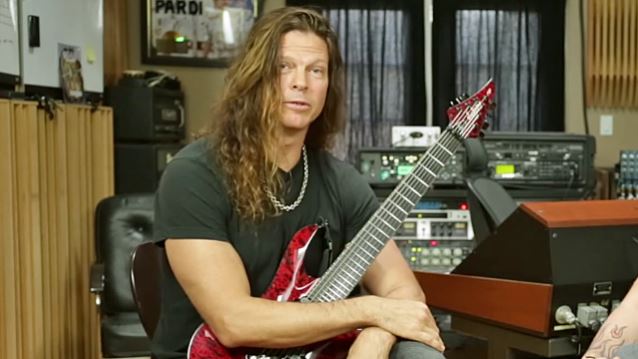 Former MEGADETH guitarist Chris Broderick spoke to Guitar World magazine about his decision to leave the band last fall, explaining that he "was constantly weighing the positives against the negatives" during his tenure with the Dave Mustaine-led group.

Only hours after drummer Shawn Drover announced his exit from MEGADETH on November 25, 2014 to "to pursue [his] own musical interests," Broderick revealed he also quit the legendary metal band, saying that he was leaving the group "due to artistic and musical differences."

Asked if there was a dress code in MEGADETH, Broderick told Guitar World: "There definitely was a dress code that he wanted to maintain for a MEGADETH look. For me, with everything in this camp, I saw very early on that Dave [Mustaine] is the owner of the company and he is the one that has the right to say how the company is presented and how it should look. The only time we had any issues was when I didn't know a specific thing about how he wanted my appearance to be, and then I would find out as we went along. I saw it very early on as a job requirement and I felt that if the job is worth it to me then I would make those changes."

Regarding whether he had considered leaving the band in the past, Broderick said: "I was constantly weighing the positives against the negatives. I likened it to a lawyer that's working for a firm and finally wants to break out and start his own firm or a chef that wants to open up his own restaurant. You have to deal with the corporate mannerisms from the company you're working for. And once it gets to a point where you feel like you would be happier on your own, that's when you finally to cut the cord. I had been thinking about what to do for a long time, but up until I decided to leave, I always felt the positives outweighed the negatives."

Asked when that balance tipped, Broderick responded: "Not until the last quarter of 2014. I was dwelling on my lack of musical creativity in the band. Dave was getting ready to go in and do another CD and my heart just wasn't in it because I knew I wasn't going to have any artistic say in the definition of the album and the music. He was calling, saying, 'Hey, I want to get you guys down there.' The last thing I wanted to do was go down there and work on a partial CD and then say, 'Hey, this isn't for me.' It was just the right time to leave."

ACT OF DEFIANCE, the band featuring Broderick and Drover, alongside ex-SCAR THE MARTYR singer Henry Derek Bonner, and SHADOWS FALL's Matt Bachand (bass), will release its debut album, "Birth And The Burial", on August 21 via Metal Blade Records.