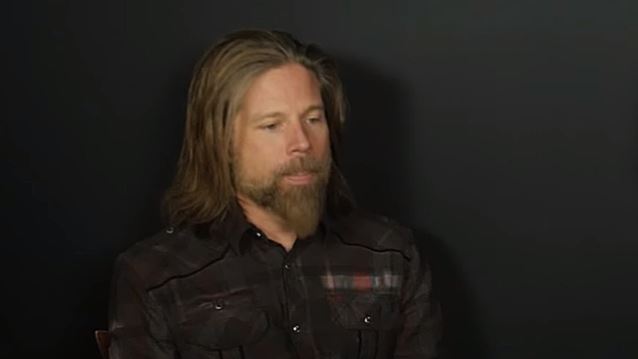 On March 17, Metal Mark of SkullsNBones.com conducted an interview with MEGADETH and LAMB OF GOD drummer Chris Adler. You can now watch the chat below. A couple of excerpts follow (transcribed by BLABBERMOUTH.NET).

On what it has been like touring with MEGADETH the last few months:

Adler: "When I first got the call, you expect to go in as a session guy. Then [MEGADETH mainman Dave Mustaine] asked me to tour, and I expected to be kind of weekly employee. But we really are having a great time. And we're friends, and we're joking around, and we're going on NASCAR rides, and tank rides, and going curling with David Ellefson [MEGADETH bassist] up in Canada. It's just like ridiculous stuff, and it's so stupid, but we're really having a good time."

On the response to "Dystopia", his recording debut with MEGADETH:

Adler: "I certainly can't take any responsibility for it, but it's great to a part of kind of my favorite band coming back to life a little bit. Not that they ever went away, but you can see the difference with this record and the numbers and the response to it… It's different. Again, I'm not taking credit, but it's nice to be a part of."

On the differences between playing with MEGADETH and LAMB OF GOD:

Adler: "I've just gotten to the point now… We did a world tour with MEGADETH, and now we're doing the U.S. tour, and I'm really just now, after months and months of touring with them, getting to the point where I'm comfortable, so I can really knd of rock out to these tunes. And I've never really learned any cover songs before this, so it took me a long time to get comfortable, because, even though these are songs that I listened to since I was a kid… Of course, they're fresh; I've never really tried to play 'em, except for the new stuff. So I'm just getting to the point where I'm comfortable doing it. But, stylistically, it's much less… It's more physical in a way, because I'm really laying into the parts, but it's less challenging, I guess, on a physical level, because most of the LAMB stuff — looking back on it, in comparison anyway — it seems like it's all just one big drum solo. So now, again, I'm trying to be the backbone for these amazing guitar players, so they can do their own thing and stay out of the spotlight. But at the same time, I'm here for a reason. Dave's a smart guy, and so I'm trying to add in my little things here and there. But I wanna be true to the songs. I'm a fan of the band. If we're playing 'Wake Up Dead', 'Wake Up Dead' should sound like 'Wake Up Dead'. It's not the Chris Adler show back there; I'm not gonna be doing anything crazy. Some of these songs aren't that easy, so it still requires a lot of attention and me really kind of focusing in on stuff, but it's a lot of fun. Like playing 'Tornado Of Souls' or something like that, that's just so ingrained in my mind. When we first got the… Dave sent the setlist for the world tour that we started in China, and when I first saw that setlist and I saw that it was on there, I was just, like, 'Yes!' I mean, that was such an athem for me in high school, and now playing it, I'm just going nuts back there. I don't even know what I'm playing. But it's such a great song; I love it."