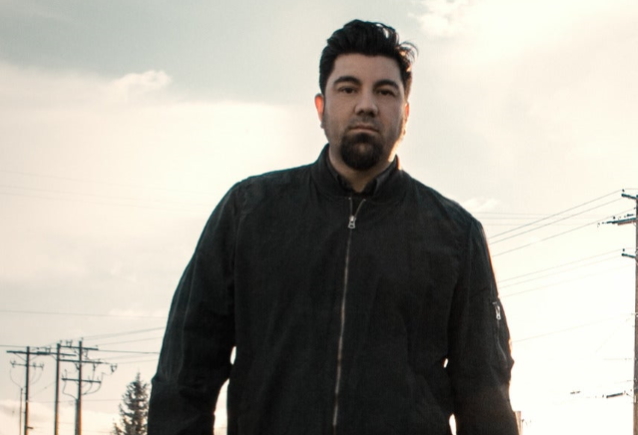 In a new interview with Full Metal Jackie's nationally syndicated radio show, DEFTONES frontman Chino Moreno was asked how the isolation during the coronavirus pandemic affected the lyrical approach and his singing on the band's latest album, "Ohms". He responded (hear audio below): "Honestly, a lot of the vocals were done before the end of 2019. I did go and I a few overdubs [this year], but lyrically, it really didn't change much.

"It's weird, because, at the time, when I was recording or writing a lot of this stuff, which was pre-pandemic, or whatever, I myself felt like I was dealing with this sort of sense of isolation," he explained. "I had been living out in the mountains for maybe a good five [to] six years. I moved straight from Los Angeles, where I was around my friends and going out to shows and doing stuff all the time to basically, the town I live in, everything was shut down at 10 o'clock at night — not many shows. So, I was just not really being around people — my band, my friends. At first, I thought it was a great juxtaposition to touring life and everything else, and it was a great kind of balance, I guess in a way, but after a certain amount of time, I think I was sort of longing just for some connection and wanting to sort of have that thing that I was missing in my life. So, when I wrote a lot of the lyrics, I think they were sort of reflecting those type of feelings. And ironically, a few months later, after the record was finished and mixed and everything, the whole world was sort of in that same — not the world itself, but the people in it were kind of, I feel, experiencing — and still are, to an extent — maybe some of those similar feelings of just longing for this connection to be around people and hug people and sweat [with each other], and everything that comes around with it. So, for some reason, it's sort of ironic that the album is a mirror of what we're going through today."

Moreno also spoke about what he has been doing during the pandemic to make up for the lack of the interaction of energy that comes with playing live for an audience.

"[I'm] just trying to stay creative," he said. "I don't think anything's gonna really replace that vibe, the connection between a band and an audience. There's been a lot of talk of us doing, like, streaming stuff or whatever, and I don't know if I'm really sold on that idea. I know a lot of bands are doing it, and I think it's great if they wanna do it. For us, I feel like our live show has always been very important to our success, so to do it halfway — I'm struggling with that idea.

"Myself, I've just been trying to make music," he continued. "A lot of my musical gear that I've had for a lot of years and never really like dove deep into it — whether it's old drum machines or even playing my guitar and messing with my pedalboards, just experimenting with my gear and keeping that creative flow going. But, yeah, it's hard to say, because I don't think anything really replaces that connection of a live show. So, it's difficult, for sure."

"Ohms" arrived in September via Warner. The disc was recorded at Henson Studios in Los Angeles, California and Trainwreck Studios in Woodinville, Washington and boasts a familiar collaborator in veteran producer and engineer Terry Date, who worked on 1995's "Adrenaline", 1997's "Around The Fur" and 2000's "White Pony".