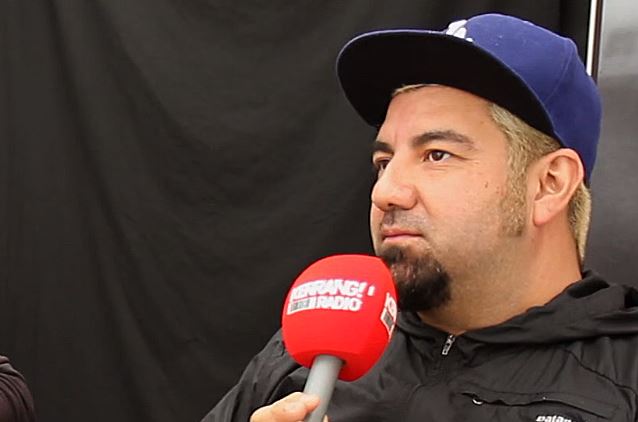 DEFTONES frontman Chino Moreno was interviewed by Kerrang! Radio at this year's edition of the Download festival, which was held June 10-12 at Donington Park in Leicestershire, United Kingdom. You can now watch the chat below.

Asked about rumors of internal strife within DEFTONES after guitarist Stephen Carpenter made comments in which he expressed being unhappy with the direction of the group's new album, "Gore", Moreno said: "It makes for a story, that there's all this tension. But we've been friends since we were little kids. In '88, we were in a garage, or wherever, and back then, we were stoked that we were in a band together, but we didn't… For one, we didn't know what we were doing. We still don't really have… I feel like that's what makes it original, in a way; that's why it is just DEFTONES. Because we don't go in with any preconceived idea of what we're trying to do. As much as we all love each other and whatever, we're all different people. And it's not as black-and-white as just, 'I like this. Stephen likes that. We fight. We make records.' It's not. There's three other guys, and everybody has an opinion, 'cause everybody's outspoken, and we're not scared to say shit to each other. No one's tiptoeing around anybody else, and that's why it's not the easiest thing sometimes to make records, but when they're done, everybody can stand behind it, because everybody spoke up."

Moreno recently described Carpenter as the "odd man out" while the band recorded its eighth studio album, although he added that it "wasn't our intention to exclude him."

"Gore" debuted at No. 2 on The Billboard 200, having shifted 71,000 equivalent album units in the week ending April 14. It is the band's highest-charting effort since their self-titled fourth album bowed and peaked at No. 2 in 2003.