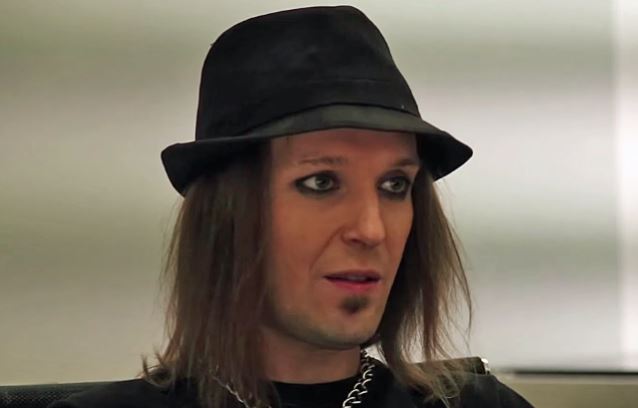 Metal Mark of SkullsNBones.com recently conducted an interview with guitarist/vocalist Alexi Laiho of Finnish metallers CHILDREN OF BODOM. You can now watch the chat below. A couple of excerpts follow (transcribed by BLABBERMOUTH.NET).

On playing all guitars on CHILDREN OF BODOM's upcoming ninth studio album, "I Worship Chaos", following the departure of Roope Latvala:

"It actually ended up being pretty cool. The only difference, really, is that I ended up working double shift. Other than that, it wasn't really that different. 'Cause, I mean, I already had written all the riffs beforehand anyway, so I knew what was going on, so I didn't really have to go out of my way and learn that much new stuff. But the thing is that when I record, I'm the type of dude who comes up with a lot of small things here and there, just kind of on the spot, so I could get to do that without having to explain it to anybody. And that's a timesaver too. Plus, I think the results… I think they actually ended up sounding a lot tighter, the guitars, so at least something good came out of a bad situation."

On what the signature CHILDREN OF BODOM sound is:

"Well, there's, obviously, the guitars and the keyboards… The keys have a certain '80s kind of vibe that we always did. Even though it's extreme metal — some call it death metal, some call it thrash metal — we do have kind of a special sound in the extreme metal scene. 'Cause the way I play riffs… Some of the riffs are very '80s-oriented. And the keyboards… I mean, half of them could be straight from a disco song. But it does work. When you mix that up with that level of brutality that we build around it and the vocals and so forth, that's sort of the CHILDREN OF BODOM sound. And then, other than that, I really actually go out of my way to not think about anything. When I'm writing, I try not to think about, 'Hmm, I'm wondering how people are gonna react to this or if the fans are gonna like that.' Most certainly, we never sit down and talk about, like, 'So what do you think? Should we sound hardcore now?' You know what I mean? I think it's important that you just kind of block all that out of your mind and do what comes naturally and keep it very spontaneous and hope for the best — hope for the fact that people are gonna like it."

"I Worship Chaos" will be released on October 2 via Nuclear Blast. The artwork for the CD was created by Finnish artist Tuomas Korpi and can be seen below.