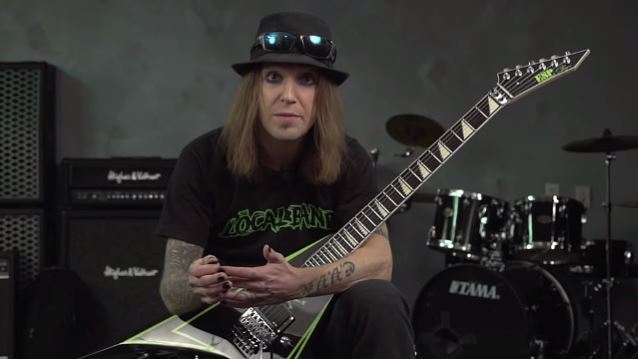 Guitarist/vocalist Alexi Laiho of Finnish metallers CHILDREN OF BODOM recently stopped by the Guitar World headquarters to show the magazine his five favorite riffs off the band's ninth studio album, "I Worship Chaos". Check out the clip below.

"I Worship Chaos" will be released on October 2 via Nuclear Blast. The artwork for the CD was created by Finnish artist Tuomas Korpi and can be seen below.

Asked if his interaction with keyboardist Janne Wirman changed because he is now the sole guitarist, Laiho told Ultimate Guitar: "Not really, because the whole situation and everything was exactly the same while we were working on the music, so nothing really changed on that part. But, actually, it seems like everybody has noticed that there are more keyboards on the new album. Funnily enough, as much as it's true that there's tons of them, but I don't know if there's any more. I think they're just more obvious. We had more shit in, like hidden keyboard parts apart from the previous album. A lot of his crazy sounds are doubling the rhythm guitars or bass lines or stuff like that."