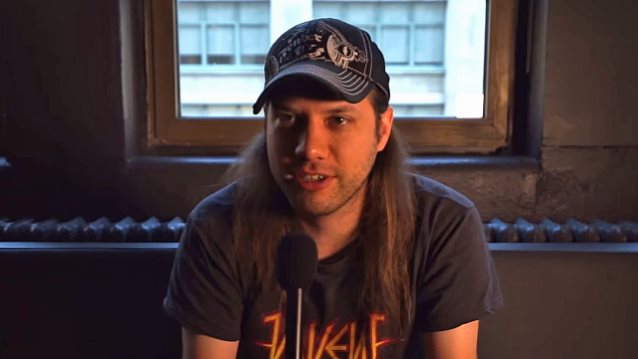 Keyboardist Janne Wirman of Finnish metallers CHILDREN OF BODOM recently spoke to Louder Noise about some traditional Finnish foods, including salmiakki, hernekeitto, and kalakukko. Check out the clip below.

CHILDREN OF BODOM's latest album, "I Worship Chaos", was once again recorded at Helsinki, Finland's Danger Johnny Studios and was produced by CHILDREN OF BODOM and Mikko Karmila, who worked with the band on their earlier albums "Halo Of Blood", "Hatebreeder", "Follow The Reaper" and "Hate Crew Deathroll". The CD was mixed and mastered at Finnvox Studios in Helsinki, Finland.

CHILDREN OF BODOM guitarist/vocalist Alexi Laiho recently told Full Metal Jackie about the making of "I Worship Chaos": "All four of us, we felt like that we needed to sort of like reinvent ourselves and push things harder and work harder and even just put more effort on everything. It felt like that the whole band was just getting tired on every possible level. So, we did a lot of changes, and got a new management and the whole nine [yards], basically, and everybody… All of a sudden, everyone was on the same level as far as brand new work ethics and stuff like that. And I think, well, at least in my opinion, you can hear that in the music, too, that it is more energetic than it has been in a couple of years, I would say, anyway."