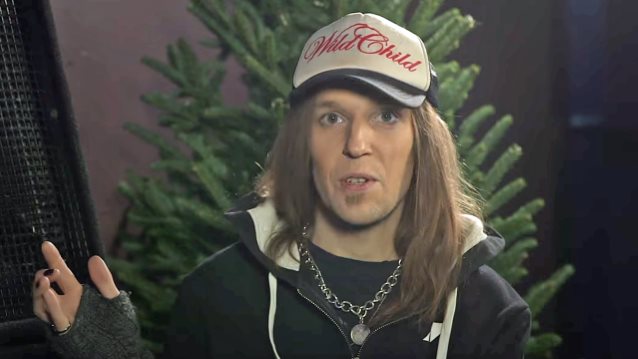 Banger TV's Daniel Dekay recently conducted an interview with vocalist/guitarist Alexi Laiho of Finnish metallers CHILDREN OF BODOM. You can now watch the chat below. A couple of excerpts follow (transcribed by BLABBERMOUTH.NET).

On the title of CHILDREN OF BODOM's latest album, 2015's "I Worship Chaos":

Alexi: "At first it was just a songtitle. Then I started thinking about it, like, 'What am I saying with this shit?' It makes perfect sense for me, 'cause I'm kind of a dude that I'm a very restless person. For example, total silence freaks me out; there always has to be something going on. It's scary, dude. It is. When I go to sleep, there always has to be something… That's the funny part of it, though. Okay, 'I Worship Chaos' sounds very strong, but it can also mean that I just need to have fucking 'Seinfeld' in the background when I go to sleep. But total fucking silence, dude, I cannot… It scares me. Therefore, chaos around me sort of makes me feel comfortable. And I just the pitched the songtitle to the other guys, and they were, like, 'That's pretty fucking strong. So that could be an album title,' which I agreed. It's pretty in your face."

On why performing live is so important to a band like CHILDREN OF BODOM:

Alexi: "We just love playing live, and that's what CHILDREN OF BODOM's always been about. Since Day One, we've been touring so fucking much — like, non-stop. And I love being on the road. I mean, all of us, we kind of grew up on the road. We were just kids when we started. We were seventeen and eighteen years old when we started, so I don't really know any other way to live. I would be so lost if all of a sudden I had to stop touring completely. I don't see us slowing down. As long as the band's together, I think we're always gonna be touring."

CHILDREN OF BODOM will perform most of its debut album, "Something Wild", on a European tour later this year to celebrate the record's twentieth anniversary. The month-long trek, dubbed "20 Years Down & Dirty", will kick off on March 8 in Hanover, Germany and conclude on April 4 in Stockholm, Sweden.