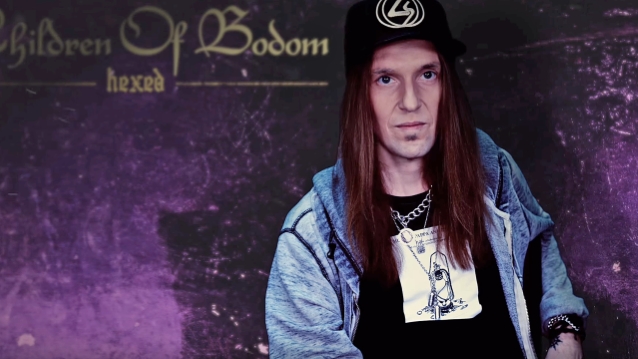 Scott McMahon of Metal Nation recently conducted an interview with frontman Alexi Laiho of Finnish metallers CHILDREN OF BODOM. You can listen to the entire chat below. A few excerpts follow (transcribed by BLABBERMOUTH.NET).

Alexi: "The thing is that, first of all, the record was already mixed and mastered in the beginning of June. It was supposed to come out last fall, but, I don't know — something happened. I really don't know what happened, but the release day got pushed back to March 8. Actually, it's been pushed back twice now, so fingers crossed, because I'm starting to go crazy with the release date because I want to get the damn thing out. That's one thing. It's actually pretty cool, because I was listening to it quite a lot after the mastering, then I took a break for a couple of months. Before I started doing promo, I started listening to it again. It was pretty interesting to take that break and then sort of start listening to it again. I noticed different things and it just sounded different. However, there weren't parts or any, well, pretty much anything that I would have wanted to change, which is pretty much the first time ever. I guess that's a good sign."

On what separates "Hexed" from other CHILDREN OF BODOM albums:

Alexi: "Since I write everything, like I always say, I'm just way too close to it as far as telling you what's different and what's not, but what I've heard from a lot of people, either friends or journalists or whatever, that a lot of people have said it sort of sounds like old-school CHILDREN OF BODOM, but not in the way we were trying to do some sort of retro COB album. It's just got a lot of elements and influences from 'Follow The Reaper' or even 'Hatebreeder'. Certain things that we haven't done in a long time. For example, in a couple of songs, we have this sort of neo-classical thing going on which we did a lot back then, but then we completely stopped doing it. Now it's kind of back. That's one little detail."

On whether he finds the songwriting process to be a "cathartic experience":

Alexi: "Yes. I guess it's always been that way. When I write, I just sort of block everything out of my mind. I just block the whole world out of my mind, basically. It's all because I don't want to think about anything, especially things like 'What if [the fans] are not going to like this part?' Or 'What if this group are not going to dig this part?' It could be very destructive when writing music. When you think about stuff like that, it's a bit a distraction and you end up writing stuff that's not for real. It's better just to sort of just do what comes naturally and just hope for the best."

On what his goals were when he started CHILDREN OF BODOM in 1997 and whether the band has achieved any of them:

Alexi: "I can tell you that we've reached things that were far beyond our dreams. It's definitely an incredible ride. I remember when the first album was coming out or even before that, we just figured that it'd be super-awesome to sell maybe a couple of thousand records and maybe just play outside of Finland one day. That was the ultimate dream. So, yeah, we've certainly done that. But, I guess at the end of the day, though, it's always been about playing live. That's what we always want to do. We were dreaming of playing bigger stages and when I say 'bigger,' I say your average club. We definitely done more than that, like headline-wise and festivals, too, like festivals with 50,000 people out there. It's been pretty rad, that's for sure. Then again, we've always worked hard and we always will. It doesn't just happen like that. You got to earn it and you got to work hard for it."