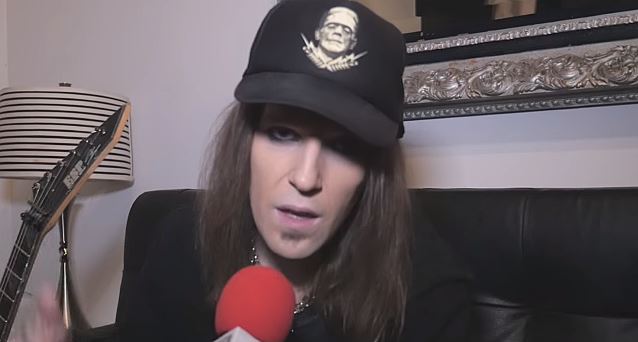 CHILDREN OF BODOM frontman Alexi Laiho has weighed in on the incident two months ago when ex-PANTERA singer Philip Anselmo made a "white power" gesture onstage at a concert.

During an interview with Horns Up Rocks, Laiho commented on the incident, saying (see video below): "I heard about it, yeah, and I actually haven't seen the footage. But I don't… I'm not sure what to say about that.

"Obviously, racism in general, you know, it's bullshit, and it's definitely not a part of metal or rock and roll; there's nothing rock and roll about it, and that's a fact. But what he did or what he said… Who knows? But on some level, though, I kind of believe that he didn't mean it that way, but, of course, it sounds kind of bad. [He said] 'white power' or something like that? Yeah. Let's just put it this way: I wouldn't say that."

He continued: "Obviously, especially nowadays, everything is filmed with a thousand different cell phones, so, of course, it's gonna become a huge matter. You can't get away with pretty much anything nowadays, so you've gotta be careful what you say.

"It's not a cool thing to do, but still… It seems like nowadays, especially, when bad stuff happens, or even good things happen, people forget so quickly, 'cause there's just so much information on the Internet, and people get it automatically. I'm pretty sure that… Give it a year or two [and he'll be okay]. Hopefully, yeah. I don't know… But I hope so anyway."

Asked if he has ever been a similar situation where he said or did something controversial while under the influence of alcohol, Laiho said: "Nothing like that ever. No matter how drunk I've been or whatever the hell, it's never entered my mind to say stuff like that. I might have, in the past, when I was in my 20s or whatever, when you're young and arrogant or whatever, and at fifteen beers deep, I might have talked some shit about some fellow musicians that didn't deserve it. Just because I'm not a fan of their music doesn't mean that I shouldn't respect what they do, and that's something that's not very cool. So that sort of thing, it's stupid. But, to my knowledge, I've never said anything politically incorrect."