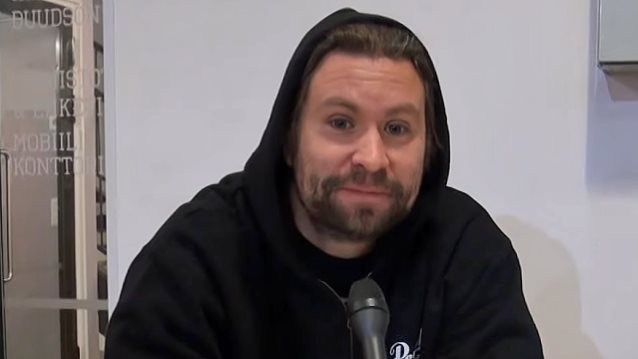 Drummer Jaska Raatikainen of Finnish metallers CHILDREN OF BODOM says that "severe back pain" has made it difficult for him to enjoy the band's live shows.

Raatikainen, who co-founded CHILDREN OF BODOM in 1993 under the name INEARTHED, revealed his condition in a Facebook post recapping 2016. He wrote in part: "Even though so many great things happened to me this year, it was still overshadowed by severe back pain that made me really frustrated and anxious. I needed painkillers to be able to perform a show and still wasn't able to enjoy it. Sometimes it was just surviving through the set. The days I didn't have pain and I could play normally were rare. Those shows I played like it could be my last show and just couldn't help thinking that this great thing what I was doing on stage could end any day."

He continued: "The tour in South America and all the festivals in the summer made me think my life and career more deeply. Being a drummer with a body that is a total wreck is probably the worst combo. All the flying and suffering from sleep deprivation was just too rough for me. It really made me think if this all work is worth the pain. Though, I don't give up very easily when it comes to what I love the most."

The drummer added that he hoped his condition would improve by the time CHILDREN OF BODOM was done recording its next studio album, which will happen in late 2017. He wrote: "We will start creating new songs during spring and summer, and will head to the studio during fall. The album will be our tenth studio album, which is also quite a milestone. It seems that after the studio I will have some time to get my back better somehow, possibly an operation if all the other options have been tried out."

As previously reported, CHILDREN OF BODOM will perform most of their debut album, "Something Wild", on a European tour early next year to celebrate the record's twentieth anniversary. The month-long trek, dubbed "20 Years Down & Dirty", will kick off on March 8 in Hanover, Germany and conclude on April 4 in Stockholm, Sweden.

Said Jaska: "A 20-year career is a long time for anyone. For me and Alexi [Laiho, CHILDREN OF BODOM frontman], it actually means 25 years together. Two thirds of my life I have been playing drums in a band and performing around the world. I am very proud of that.

"I cannot wait for the tour in the spring and playing some old songs. The set will include some rarities and also some songs we have never played live. Practically we have played some of the songs in '97 or '98 — 20 years ago!

"We really have to dig deeper to the first two albums and try to figure out what exactly was the thing each of us wanted to express with our music."

First of all a new guitar player Daniel (who is a Finnish guy...