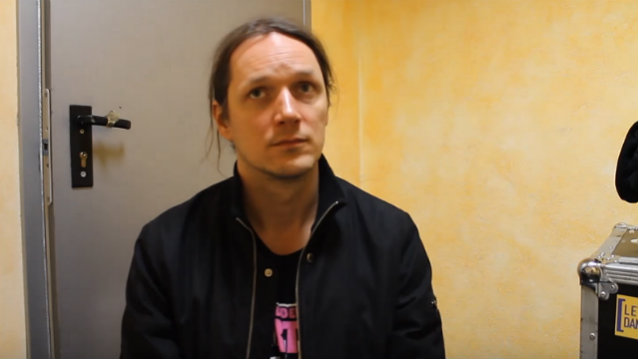 Arianna of Rock Rebel Magazine conducted an interview with bassist Henkka Seppälä (a.k.a. Henkka T. Blacksmith) of Finnish metallers CHILDREN OF BODOM on March 22 in Italy. You can now watch the chat below.

Asked if there are any plans for CHILDREN OF BODOM to film and release a new concert DVD to follow 2006's "Chaos Ridden Years/Stockholm Knockout Live", Henkka said: "I would like to do… If I could choose, I would just do one good show and have it recorded with cameras really nicely and we have a live album — like kind of a traditional live DVD. But as I talked yesterday with our label guys, it doesn't really make sense, and they were suggesting maybe we should do something like record one show live and have it as a bonus material for the next album or something. So, yeah, we have to think about these options, but it would be to put out something live again. But I think it should be a full show so that there's all the varieties of our history in one show."

CHILDREN OF BODOM is performing most of its debut album, "Something Wild", on a European tour to celebrate the record's twentieth anniversary. The month-long trek, dubbed "20 Years Down & Dirty", kicked off on March 8 in Hanover, Germany and will conclude on April 4 in Stockholm, Sweden.