CHILDREN OF BODOM was honored in the "Metal/Hard Rock Album Of The Year" category (for its 2008 release, Blooddrunk") at this year's Emma Gaala (Finnish Grammy equivalent), which was held March 14 at Kulttuuritalo in Helsinki. The awards ceremony was televised on the Finnish TV channel YLE TV2. Other artists that were nominated in the "Metal/Hard Rock Album" category were DIABLO, STAM1NA and STURM UND DRANG. Elsewhere, APOCALYPTICA won the "Export" award, METALLICA took home the "Top-Selling Album Of The Year" prize for "Death Magnetic" and SLIPKNOT was named the "Foreign Artist Of The Year".

For a complete list of this year's winners (in Finnish), visit www.emmagaala.fi.

"Blooddrunk" sold 19,000 copies in the United States in its first week of release to debut at position No. 22 on The Billboard 200 chart. This was roughly four times the opening tally of its predecessor, "Are You Dead Yet?", which premiered with 5,000 units back in October 2005 to land at No. 195.

"Blooddrunk" was certified gold in Finland (for sales in excess of 15,000 copies) on pre-sales alone — before it was even officially released — a first for the band.

The CD was released in North America on April 15, 2008 via Spinefarm/Fontana International.

The video for the CD's title track, which was produced by Katapult Filmproduktion, can be viewed below. The clip was shot in the former Nazi barracks in Krampnitz in the vicinity of Berlin, Germany, where the Russian army was stationed before the German reunion. 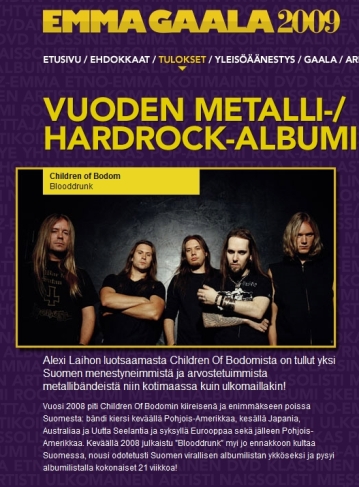