Finnish melodic metallers CHILDREN OF BODOM will embark on the "Hexed" 2019 North American tour this spring. The trek will kick off in Quebec City on March 13 and conclude in New York City on April 19. Support on the trek will come from Finnish death-doom melody makers SWALLOW THE SUN and Finnish epic melodic death metal quartet WOLFHEART as well as SUMMONER'S CIRCLE (March 13-16 and April 9-19), HOLLOW CRY (March 18-29) and FRAGMENTUM (March 30 April 7).

CHILDREN OF BODOM frontman Alexi Laiho comments, "Hello, North America! Just wanna say and empathize the word 'finally' ... fuckin' finally we'll be back on the road — like old-school style and over the pond too!! We'll be in your town just as you're getting your hands on the new record. Even if you do not have it, don't worry, 'cause we're gonna rotate the setlist to include old tracks that will blow your mind back to hell so it's gonna be a good fuckin' party, ladies and gentlemen. Hoping to see you there!!"

CHILDREN OF BODOM's tenth album, "Hexed", will be released on March 8 via Nuclear Blast Records.

Laiho comments: "People have said that this album is generally catchier. So I started thinking about that; perhaps the song structures are easier to grasp on initial listen. But there's some crazy shit in there — almost progressive or at least technical. There are certain melodies across the album that could have come from jazz songs, although they're completely metal with us, of course. [Laughs]"

"For me, it has always been very hard to describe our new music," comments bassist Henkka Seppälä (a.k.a. Henkka T. Blacksmith). "In a way, it always feels familiar, but the new stuff also always surprises me. Here we have something that's very BODOM, but somehow we haven't done this kind of stuff, possibly ever. Then again, someone said that there's a somewhat similar vibe to what 'Follow The Reaper' had. I don't know. Anyway, we had a really hard time choosing the songs for the videos. I guess that's a positive problem to have."

"Hexed" saw the return to Finland's Danger Johnny Studios where COB was reunited with Mikko Karmila ("I Worship Chaos", "Halo Of Blood", "Hatebreeder", "Follow The Reaper" and "Hate Crew Deathroll") who recorded everything except keyboards and also produced the album with the band. Janne Wirman recorded keyboards at Beyond Abilities Studios. The album was mixed and mastered at Finnvox Studios in Helsinki, Finland. 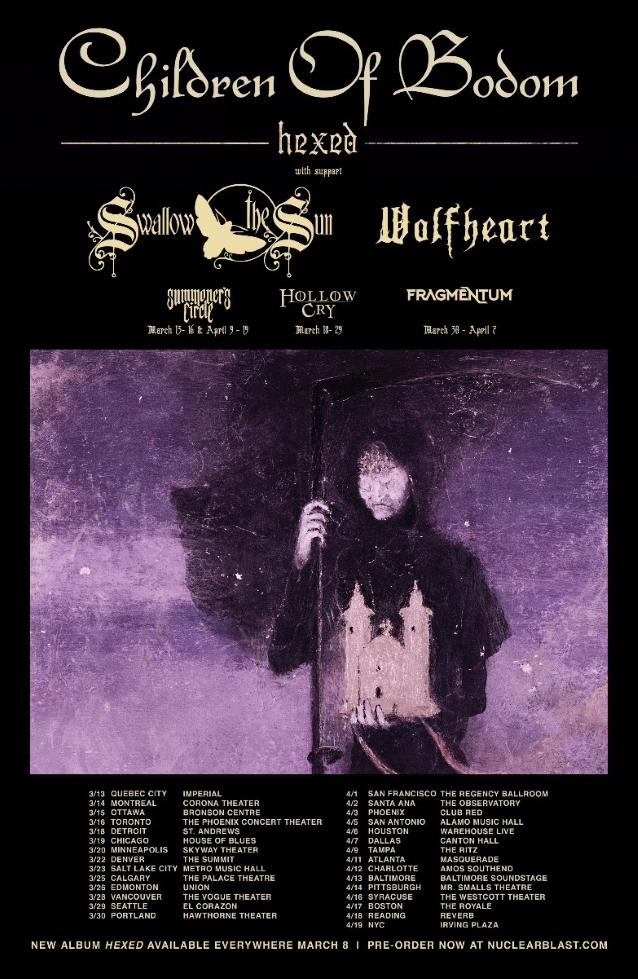