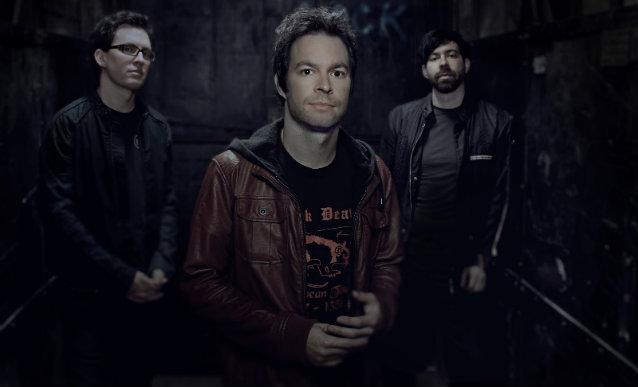 According to The Pulse Of Radio, CHEVELLE stepped away from the spotlight for most of the past year, but the band is getting back to business in 2014. The Chicago-based trio is in the studio now working on its seventh album and has posted a brief video of frontman Pete Loeffler figuring out a new riff on his guitar while producer Joe Barresi comments in the background.

Previous posts have included further looks inside the studio as well as a glimpse of the old school Studer A800 tape machine the band intends to record on, indicating that they're taking the analog route this time.

CHEVELLE's last all-new studio effort, "Hats Off To The Bull", arrived in 2011. It featured the No. 1 rock hit "Face To The Floor".

CHEVELLE's next album will be its last for Sony Music, and Loeffler told The Pulse Of Radio he's not sure how the band will proceed after that. "You know, in a perfect world, we'd like to just do it all on our own," he said. "I think that's what every band probably, after five or six records, probably wants to do. I mean, you want more control — I mean, I do. Hey, I'd love to put out my own music. If that can be possible, we would probably do it."

Last December, CHEVELLE released "Stray Arrows: A Collection Of Favorites", a 12-track set featuring all 11 of the band's Top 10 rock/alternative singles, including "Jars", "Vitamin R (Leading Us Along)", "The Red", "I Get It", "Face To The Floor", "Send The Pain Below" and more.