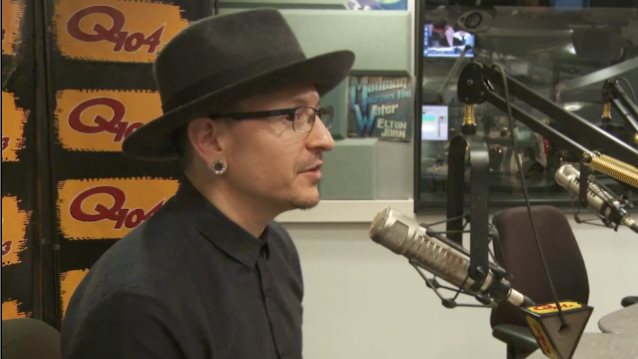 Chester Bennington says that he is longer fronting STONE TEMPLE PILOTS because he wanted to make his family more of a priority.

The LINKIN PARK singer joined STP in May 2013 after the famed alt-rock group fired Scott Weiland, who helped found the band in 1985. Bennington and STP released the five-song "High Rise" EP in October of that year. It included the singles "Out Of Time" and "Black Heart".

Two months after Weiland's December 2015 death, and three months after Bennington ended his two-year tenure with STP, the remaining members announced they would hold auditions to fill the role of STONE TEMPLE PILOTS singer. The band has not announced who will be joining the group as their new vocalist.

During an appearance earlier today (Tuesday, February 21) on Q104.3's "Out Of The Box" with host Jonathan Clarke, Bennington said about his collaboration with STONE TEMPLE PILOTS (see video below): "Man, let me just tell you, I have the highest respect for STONE TEMPLE PILOTS. I love Scott [Weiland]. I'm sad that he's gone. He was a huge supporter."

He continued: "I just heard a really interesting story the other day about how [Scott] had heard [LINKIN PARK's debut album 'Hybrid Theory'] with one of the programmers in California, and said basically, 'That's it. That's what you guys are going to be playing from now on.' That just means a lot to me, because he actually introduced me to a lot of the people that I play music with.

"I've seen STONE TEMPLE PILOTS play, like, probably thirty times. [They were] a huge influence on me. They really made music that I absolutely loved, and I still love to this day. And so the chance to go ahead and go out and perform those songs with those guys was really very, very cool. And, honestly, Robert [DeLeo, bass] and Dean [DeLeo, guitar] and Eric [Kretz, drums], those guys are super talented."

"But, yeah, I had so much fun. I actually still get to play with those guys every once in awhile. And I have a deep, deep love. And the only reason why I'm not doing it now is because my kids, they would cry every time I'd go on the road with STP.

"When I leave on tour with LINKIN PARK, they're, like, 'Okay, we'll see you when you get back,' and they understand what I'm doing. But when I would leave with STP, they would cry. And I started realizing, I think they thought I was choosing to do that over being at home with them, because I would be done with LINKIN PARK and coming home. And so, it was just too hard on my family. So I basically was, like, 'You know what? I've gotta stop being selfish here, and when I'm not doing LINKIN PARK, I've just gotta be home with my babies."

STONE TEMPLE PILOTS reunited with Bennington for a one-off performance in March 2016 at "From Bach To Rock", a star-studded event put together to benefit Palos Verdes Peninsula public schools.

LINKIN PARK's seventh studio album, "One More Light", is due out on May 19 through Warner Bros.