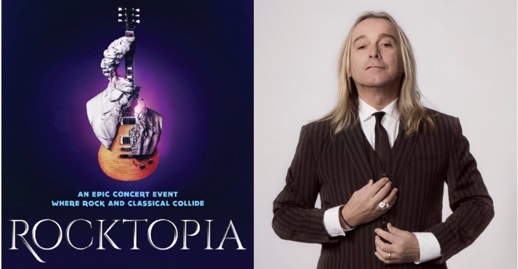 The producers of the Broadway concert "Rocktopia" have announced that multi-platinum Rock And Roll Hall Of Famer Robin Zander, lead singer of CHEAP TRICK, will make his Broadway debut as a special guest vocalist in the show for the final week of its limited engagement, April 23-29. An explosive concert event that fuses the most iconic 20th-century rock with world-renowned classical masterpieces, "Rocktopia" features the works of musical innovators across centuries — including JOURNEY, Mozart, QUEEN, Beethoven, AEROSMITH, Handel, LED ZEPPELIN, Tchaikovsky, U2, Copland, HEART, Puccini, THE WHO and more — performed by an elite lineup of vocalists, a five-piece rock band, a 40-person choir, and a 20-piece orchestra. "Rocktopia" celebrates its opening night at the Broadway Theatre on Tuesday, March 27. Tickets are now on sale at Telecharge.com.

Zander and CHEAP TRICK first hit the music scene in 1974 with their unique blend of punk, pop and metal — a sound which catapulted the band to international stardom with such hits as "I Want You To Want Me", "Surrender" and "Dream Police". Forty years and 25 albums later, Zander is still widely considered one of the greatest rock voices of all time, and in 2016 the band was inducted into the Rock And Roll Hall Of Fame.

Tickets are on sale via Telecharge.com. A limited number of $35 General Rush Tickets will be available for that day's performance when the Broadway Theatre Box Office (1681 Broadway) opens each day (10 a.m. Monday-Saturday and 12 p.m. Sunday). Tickets are subject to availability. Special student pricing, beginning at $39, is available for the duration of the run.