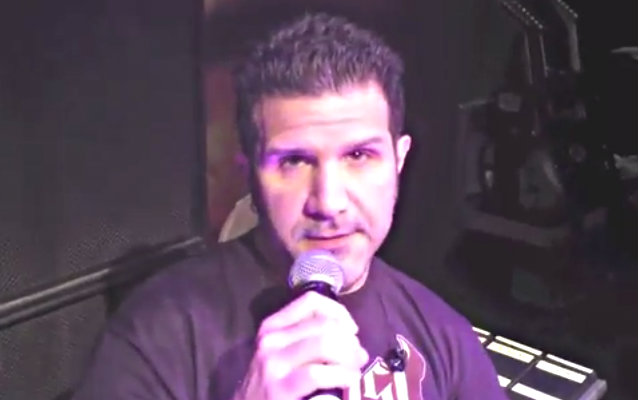 Metal Wani recently conducted an interview with ANTHRAX drummer Charlie Benante. You can now listen to the chat in the YouTube clip below. A couple of excerpts from the chat follow.

Metal Wani: Can you tell us about the recording process for your upcoming album? How are the songs coming together?

Charlie: I think the songs are coming together really well. You know, like, the first ideas I had for this record, some of them were, like, left over from the last record [2011's "Worship Music"], but I threw those out, didn't even bother with it anymore, 'cause I just felt, 'You know what? This other stuff is better than that,' so I just went ahead and just started from scratch, you know, just brand new.

Metal Wani: With guitarist Rob Caggiano leaving ANTHRAX in January, did it mess up the plans for the next record?

Charlie: No. I mean, Rob really never was involved in the creative side of the band. It's always been myself and Scott [Ian, guitar] and then Frankie [Bello, bass] would help out. I mean, just on the production side of things, Rob would get involved more.

Metal Wani: You guys have [guitarist] Jonathan [Donais, SHADOWS FALL] who is a part of the process now. Is he part of the album, helping with some solos or something like that?

Charlie: Yeah, I think so. I think we'll give Jon some of the songs and say, "Hey, what can you come up with in this lead section?" and then see how he creatively comes up with stuff and kind of [take it] from there.

Metal Wani: What was it that you saw in Jonathan Donais [that made you decide to ask him] to take Rob Caggiano's place?

Charlie: Actually, it was Rob who found… I mean, I've know Jon for quite a bit and always got along with him — he's a great guy and he is a very good guitar player — and so, I guess, Rob called him up and told him that he was going to be leaving and would he like to step in, so that's how that went.