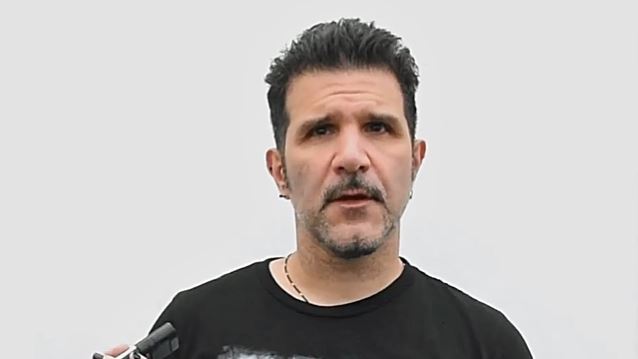 ANTHRAX drummer Charlie Benante was interviewed on a recent installment of HATEBREED frontman Jamey Jasta's official podcast, "The Jasta Show". You can now listen to the chat using the SoundCloud widget below.

Speaking about singer Joey Belladonna's 2010 return to ANTHRAX after a short-lived reunion several years earlier, Benante said: "Well, you know, we had this reunion that we did back in '05, and I think it was for the wrong reasons. It wasn't about repairing friendships first; it was about other people were telling us, 'Go do it,' and then we were just kind of thrusted into this thing and we didn't have a chance to really work on our relationship first, and it fell apart; it wasn't real. You know what I mean? And I think we learned from that a) life is too short, [and] b) do you really wanna not do this anymore? Do you really wanna make something of this? And then we repaired our relationship with Joey, and then we made it happen, and it worked out the right way this time; it was very organic and it wasn't… We weren't pushed into doing it; it wasn't fake [and] it was very real. So I feel that we did this thing the right way."

He continued: "You know when you start to go out with a girl, you don't wanna meet her… you don't wanna meet your girlfriend at a strip club. [Laughs] And it's, like, with this, I felt we did it the right way, like we did it the first time. And it really has a lot of comparisons to the first time, because we had a record that was already written called 'Spreading The Disease' that Joey came in and sang. This time we had a record called 'Worship Music' that was already written and Joey came in and sang. And then the next record was 'Among The Living', and then this next record was ['For All Kings']. So we had this momentum, and we kind of bonded again with each other, musically, and just… we worked it out together. And it's been the best it's ever been… Now it's kind of like the way it once was."

Charlie also talked about the difficulty of keeping groups intact when the bandmembers spend so much time together on the road.

"When you're in a band with other men, sometimes the men aren't always men; they act like children," he explained. "And some days you act like a child too. It's just knowing what's gonna trigger something that's gonna trigger something that's gonna make someone kind of flip out. And when you're travelling together, sometimes you all just get a little on your nerves. It's normal, it's human. You just can't let it get to the point where the other four of you get in a room together and you go, 'We've gotta get rid of this motherfucker.' [Laughs]"

After firing Belladonna for the first time in 1992, ANTHRAX recruited ARMORED SAINT singer John Bush and released an album called "Sound Of White Noise", widely considered to be one of the band's finest, and possibly most misunderstood, releases.

"Nowadays, when people talk about 'Sound Of White Noise', they talk about it in the sense that it was our 'grunge' album, but it really wasn't our grunge album," Benante said. "The only thing that was grunge about it was Dave Jerden, who produced it, he did ALICE IN CHAINS as well, and JANE'S ADDICTION. But… I don't know. That was a weird time, I think, for metal; it was in a very weird place. And the oddest thing, to me, is when we had… 'Heavy metal' was such a bad word to say, especially in America, because you had alternative, remember? But the band that was the biggest at that time was PANTERA, who was probably the heaviest to come out."

ANTHRAX split with Belladonna for the second time in January 2007, less than two years after reuniting with him and other members of the band's "classic" lineup of the '80s and early '90s.

ANTHRAX eventually reunited with Belladonna in May 2010 and recorded two more albums with the singer: 2011's "Worship Music" and the aforementioned "For All Kings".