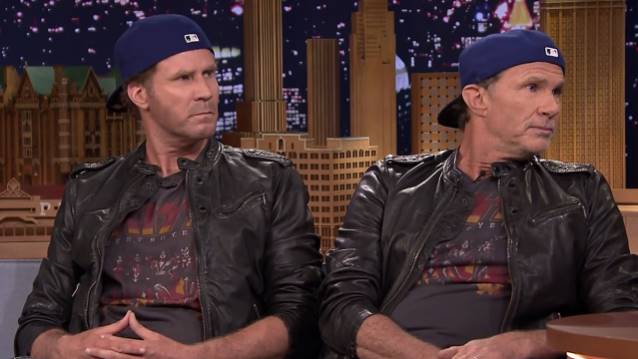 According to The Pulse Of Radio, the musical event of the millennium took place on Thursday night (May 22), as RED HOT CHILI PEPPERS and CHICKENFOOT drummer Chad Smith and his amazing lookalike, actor Will Ferrell, held their long-awaited drum-off on "The Tonight Show Starring Jimmy Fallon". The pair showed up on the program in matching black leather jackets, KISS T-shirts, sneakers and blue baseball caps worn backwards, and sat down with Fallon to discuss the history of their "feud" — with each speaking as the other person.

Asked by Fallon if he remembered the first time he heard about his "impostor," Ferrell — speaking as Smith — replied, "Yeah. I was jammin'. I was jammin' with the CHILI PEPPERS, with my guys. At our jamhouse. I'm like, 'Flea, this is bull. I'm tired of not getting enough respect as Chad Smith. I'll be honest, I'm a little high right now."

The pair then launched a "traditional drum-off," with the intensity and complexity of the solos increasing with each successive round.

Ferrell was assisted by Fallon's band leader and "ghost drummer" Questlove of THE ROOTS.

The biggest surprise took place as the rest of the RED HOT CHILI PEPPERS showed up to play BLUE ÖYSTER CULT's "(Don't Fear) The Reaper" with Ferrell switching, of course, to cowbell. Fallon presented Ferrell with a golden cowbell at the end, announcing him as the winner.

The performance was the first by the RED HOT CHILI PEPPERS on a late-night show since 2006. The band also played FUNKADELIC's 1974 track "Standing On The Verge Of Getting It On" with THE ROOTS and "Give It Away".