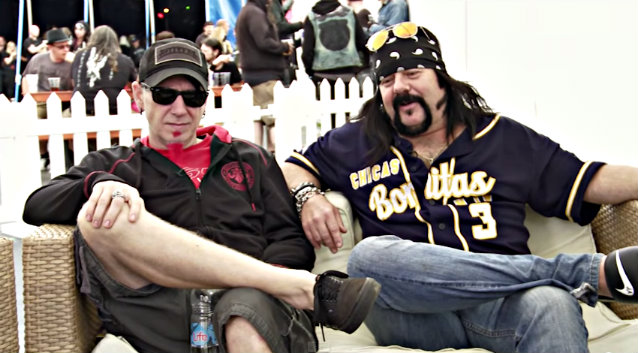 Daniel P. Carter of Scuzz TV conducted an interview with HELLYEAH singer Chad Gray and drummer Vinnie Paul Abbott at this year's edition of the Bloodstock Open Air festival, which was held August 7-10 at Catton Hall, Walton-On-Trent, West Midlands, United Kingdom. You can now watch the chat below.

Speaking about what it has been like for the members of HELLYEAH to go from successful bands like PANTERA and MUDVAYNE to practically starting over with their new group, Gray said: "You're out on your own and you're not with the collective where you came from. It's a different band. You're bringing those attributes from everybody into the collective that is HELLYEAH. But it's been a startover process. But you know what?! It's been a lot of fun. It's humbling. You get back to what you really started in music for, that passion and love for it. You need it. The business just kind of trickles into things that become successful. You've kind of gotta keep your eyes on everything and stuff like that. It eventually becomes a lot of business. That passion thing becomes a job."