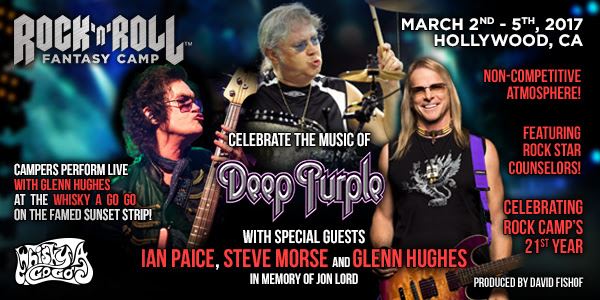 From "Machine Head" to "Burn" to "Perfect Strangers" and beyond, DEEP PURPLE are considered to be among the pioneers of heavy metal and modern hard rock , with founding member Ian Paice along with guitarist extraordinaire Steve Morse and the "voice of rock" Glenn Hughes among the true legends in rock and roll history.

Spend four days immersed in the music that made DEEP PURPLE a true rock and roll icon and influence over the last forty-plus years… you will jam the songs from the albums that have made up the soundtrack of your life… including a live performance at the legendary Whisky A Go Go, where you will perform with Hughes!

"Always my pleasure to return to Rock 'N' Roll Fantasy Camp," said Hughes. "An honor to give back what has freely been given to me, and to help capture the spirit of rock music with the campers. Music is the healer and is the greatest natural high. Share the love with gratitude. We suit up, show up and rock. See you all in L.A."

"I'm excited that I've been asked back for a visit at Rock 'N' Roll Fantasy Camp, this time in Los Angeles," said Morse. "Can't wait to get back to Camp again and jam with some of these great players!"

Rock 'N' Roll Fantasy Camp also has a new focus on its master classes with counselors such as Vinny Appice (BLACK SABBATH), Tony Franklin (THE FIRM), Gary Hoey and many more, where you can present your original songs at our counselor roundtable or learn the secrets of working successfully in a band. There are classes on all instruments, practice techniques, showmanship and so much more.