CAVALERA CONSPIRACY the new project featuring SEPULTURA founding members Max (guitar, vocals) and Igor Cavalera (drums) alongside vocalist Joe Duplantier (bass) of the French progressive death metallers GOJIRA and SOULFLY guitarist Marc Rizzo made its official live debut Friday night (May 30) at the Electric Weekend in Madrid, Spain. Photos of the concert are available at this location. A couple of the shots can also be viewed below (courtesy of Flickr users mystery-man! and Extreme Ambient). Fan-filmed video footage is also available.

In other news, Pat Douglas of the Great Falls Tribune recently conducted an interview with CAVALERA CONSPIRACY frontman Max Cavalera. A couple of excerpts from the chat follow.

On how he came to work with Igor again:

"Igor really came back to me not to play first, just as a brother. (He) just wanted to fix the relationship and be a family again and meet my kids. I'm the instigator of the whole music thing. I put him on the spot. Of course, I lied to him. I'm like, 'I have 200 songs, man. Don't even worry about that.' I had only one song. I remember waking up the next morning and (my wife/manager) Gloria looking at me like, 'You're in deep (trouble). You better write some songs 'cause you lied to your brother.' I worked on those songs for the whole weekend and sent him a CD with a rough eight songs that ended up being on the record."

On how he and his brother are making up for lost time after not speaking to each other for 10 years:

"It's great. Igor calls me now, like the day that he likes to call me is Sunday 'cause in Brazil Sunday's a real family day. I talk to all the kids. He's got some amazing kids, man. One of the girls ... she's a huge BEATLES fan and she found out that I recorded with Sean Lennon and she went crazy. It's cool because I didn't have that kind of relationship with Igor in SEPULTURA. I really enjoy this relationship we have now. It's a little more special and I'm really digging that."

On how CAVALERA CONSPIRACY's record label, Roadrunner Records, supposedly didn't know the brothers had reformed a band and were recording music until they already were knee-deep in new music:

"I never talked to the guys about it at all. It was really a no-boundaries, no-rules type record. We kept it really secret and Roadrunner didn't even know we were in the studio. That's how secret this was. It was like a real conspiracy. By the time Roadrunner knew there was something going on, we were almost to the end."

On the connection shared by the brothers when they're playing together:

"We don't have to say much. When I throw a riff at Igor, automatically in his head, he thinks of the beat, puts in the riff and most of the time, it's something different than what I had in mind. He always surprises me with certain beats. Sometimes the rest of the band couldn't keep up with me or him, which I think is cool. It was just from playing with him for so long. It's so natural. Totally instinct. That never went away. That's the beauty of it. Ten years, 12 years, it doesn't matter. When I play music with him, he's right back to where he was."

Read the entire interview at the Great Falls Tribune. 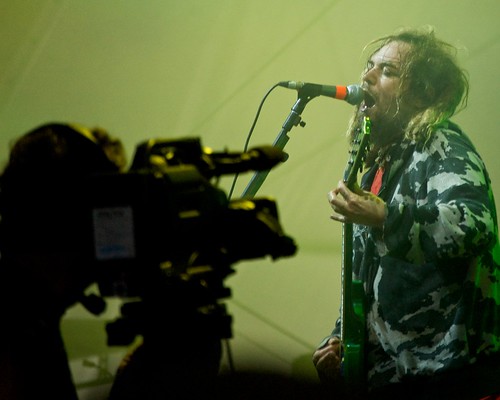