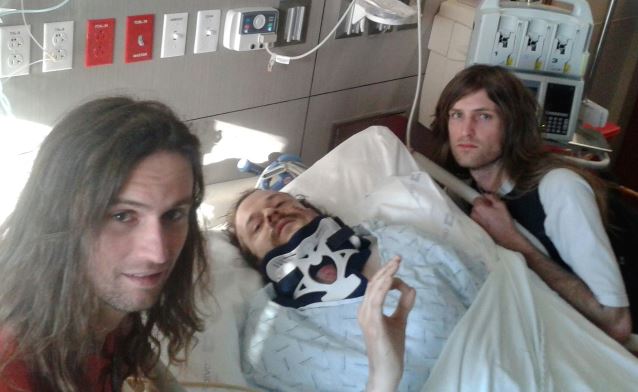 Toronto, Ontario, Canada metallers CAULDRON have been forced to cancel their participation in the eight remaining dates of their tour with ENFORCER, WARBRINGER and EXMORTUS after getting into a van crash on a highway in Texas Sunday night.

Says CAULDRON in a Facebook post: "Sorry to report the unfortunate news of our accident (not at fault [by the way]) on the highway in Texas last night and that we will have to pull out of the remaining eight tour dates. Ian [Chains, guitar] is recovering in hospital and is expected to make a full recovery, otherwise everyone is going to be okay. We are just happy to be alive at this point. Thanks for your support and to our tour mates ENFORCER, WARBRINGER & EXMORTUS; we had fun and wish you all the best. Hope to see you all again soon."

CAULDRON's fourth studio album, "In Ruin", was released on January 8 via The End Records.

Sorry to report the unfortunate news of our accident (not at fault btw) on the highway in Texas last night and that we...