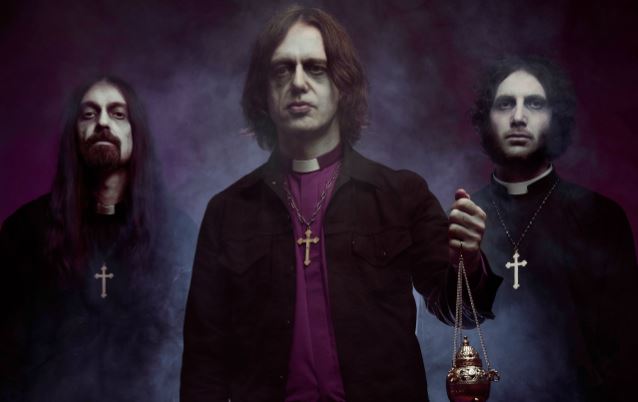 WITH THE DEAD, the new U.K.-based band featuring members of CATHEDRAL and ELECTRIC WIZARD, will release its six-track, self-titled debut on October 16 via Rise Above Records.

WITH THE DEAD was formed by the founding rhythm section of occultist doom overloads ELECTRIC WIZARD: guitarist/bassist Tim Bagshaw and drummer Mark Greening, a pair once notorious for the sheer brute heaviness of their bowel-shaking sound and early extra-curricular activities that involved excess, injury and low-level criminality (arrests for the theft of a crucifix from a church roof and drunkenly robbing an off-licence to name but two). Both have also played together in RAMESSES.

Completing the triangle is frontman Lee Dorrian, co-founder of doom pioneers CATHEDRAL, former frontman with grindcore legends NAPALM DEATH and owner of Rise Above Records, the U.K.'s finest independent purveyors of all sounds heavy and underground, whose stable of bands include GHOST, UNCLE ACID & THE DEADBEATS, LUCIFER, BLOOD CEREMONY and WITCHCRAFT. Having been in business since 1988, Rise Above is also one of the most enduring.

Like the product of some sort of alchemical alignment or a diabolical modern demon summoned by a whispered incantatory spell, WITH THE DEAD formed on All Hallow's Eve 2014. They worked quickly and the result is a six-track, self-titled debut broadside that draws on the members' rich musical legacy but without ever taking a backward step. Rising like a fecund creature from the fetid bogs of old England, WITH THE DEAD is a malevolent beast that lurches and staggers, flattening everything in its path. Guitars moil and curdle, bubbling up through the loam like black tar, while existing fans will surely welcome the return of Dorrian's distinctly hateful vocals. The album was recorded at Orgone Studios in High Barnet, London with producer/engineer Jaime Gomez Arellano in late March/early April 2015. "With The Dead"'s vocals were then added in two very short evening sessions in April and May 2015.

"With The Dead" track listing:

WITH THE DEAD lineup: