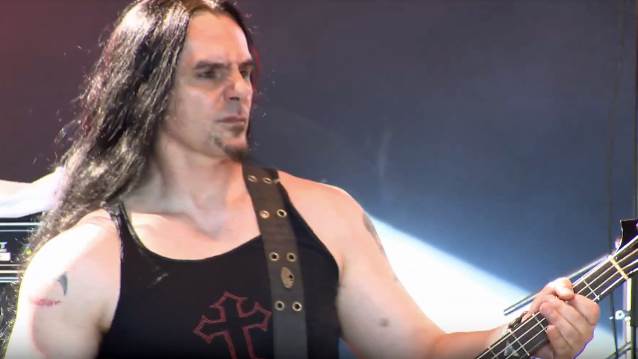 Professionally filmed video footage of CARNIVORE A.D.'s performance at this year's Hellfest, which was held last month in Clisson, France, can be seen below.

When Brooklyn, New York thrash metal crossover band CARNIVORE was first formed in 1982 by groundbreaking vocalist Peter Steele, no one could have predicted the influence they would inject into underground heavy metal culture, or the legacy Steele would carry on into TYPE O NEGATIVE. The raw energy of their aggressive and often shocking, violent live assaults reverberated beyond the walls of the New York City clubs they frequented, creating an impact acknowledged throughout the metal community even today.

Piovanetti stated: "[In] May [2017], I was very fortunate to perform CARNIVORE music live again for the very first time in over 20 years. The jubilant and humbling reception I received confirmed to me that Peter Steele is gone, but his epic legacy is not forgotten."

Natives of Brooklyn, New York, CARNIVORE spent their early years in the 1980s earning a reputation as one of the area's most dangerous bands. Crowds would stare in utter shock as these instrument-wielding warriors would take the stage clad in futuristic outfits that typified the meaning of CARNIVORE.

Dressed to the hilt in fur-covered shoulder pads, spikes, hockey equipment, nails and anything that gave them the appearance of flesh-eating monsters, CARNIVORE frequently drenched the front rows of their audiences with blood, brains, and innards, provoking a maniacal reaction like frenzied sharks being taunted with buckets of chum.

Original CARNIVORE guitarist Keith Alexander (later of the short-lived PRIMAL SCREAM project) was killed in a bike accident on July 11, 2005. In addition to playing with CARNIVORE, Alexander spent a three-year stint with Dee Snider of TWISTED SISTER, touring extensively throughout North America and Scandinavia, with some audiences numbering over 20,000.