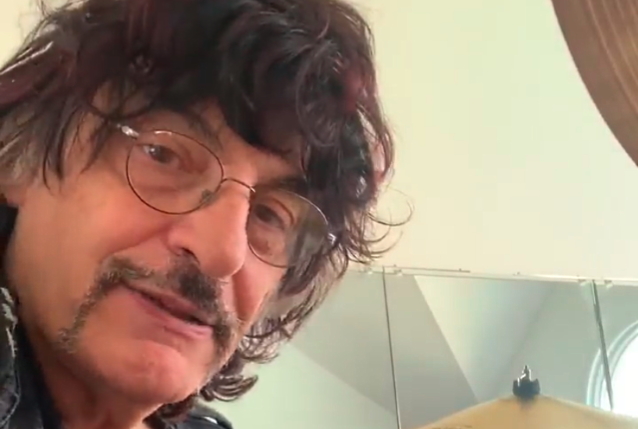 Legendary drummer Carmine Appice has reflected on the passing of QUIET RIOT drummer Frankie Banali. Banali, who joined QUIET RIOT in 1982 and played on its breakthrough album, 1983's "Metal Health", the first heavy metal LP to top Billboard's album chart, died in August after a 16-month battle with pancreatic cancer.

Speaking to "The Rock N Ragni Show", Carmine said about Frankie's death (see video below): "It lets you realize the mortality of all of us. I almost died myself a couple of years ago, with the health thing, and since then I've been listening to the Bible and I thanked my Lord. When I woke up in this place, I was in a dark room, I thought I died. So, it was scary.

"But Frankie, I loved Frankie," he continued. "He was such a good guy. They did that QUIET RIOT record. I was working in that studio, Pasha — I had a solo record which was released on Pasha. And I recorded a [Ted] Nugent album I did in Pasha. And I recorded it at an L.A. studio, with a drum booth, and it was all taped down. There was no ambience or anything. And it was awful. So I said to [producer] Spencer Proffer, 'Look, if you want me to work here, I've gotta fix the drum sound in this place.' He said, 'Well, what do you wanna do?' I said, 'First of all, get me a roll of rugs. Just put up plywood all around the room and create some ambience. You need some slap; you need some echo. It can't be dead.' So he said, 'Okay.' So I worked with the engineer, Duane Baron, and we came up with this killer drum sound that I used on my VANILLA FUDGE 'Mystery' album and I used it on the [Rick] Derringer and Appice record, 'Party Tested', that we did in '83. And then Frankie Banali used it on the first QUIET RIOT record ['Metal Health']. And that went huge. So when he first recorded it, before it came out, Frankie was, 'Wow, man. I love the drum sound you got. It was great. Thanks so much for working with Spencer and getting that drum sound. It's killer.' I said, 'Thanks, man. I'm glad you got to use it.' Who knew? Five million records later, I'm busting Frankie's balls. I go, 'Yeah, you got your hit record on my drum sound, you little bastard.' [Laughs]

"I saw him in January at the NAMM show, and he wasn't looking good. I said, 'Man, I'm so sorry you're going through this.' He said, 'Thanks, man.'

"He was just a beautiful human being."

Appice went on to comment on QUIET RIOT's recent announcement that it will carry on touring following Frankie's death. The band, which now features drummer Johnny Kelly (DANZIG, TYPE O NEGATIVE), will play a couple of shows in October as well as and a string of dates in 2021.

"That's kind of weird," Carmine said. "That's kind of weird, because there's no original members. It's like a tribute band. At least they should call Carlos [Cavazo, guitar], or call Rudy [Sarzo, bass]. It's crazy. It's like doing BLUE MURDER without John Sykes. They did it without Kevin [DuBrow, vocals], which was pretty wild that they got it going."