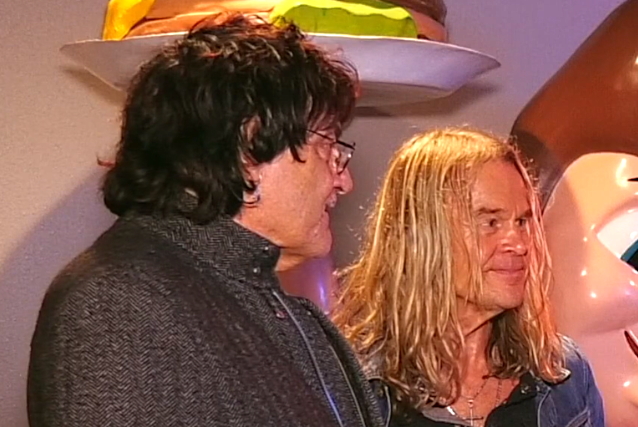 In a new interview with "The Blairing Out With Eric Blair Show", drummer Carmine Appice and bassist Tony Franklin discussed the possibility of a reunion of the power trio/supergroup BLUE MURDER. The band was by formed by guitarist/vocalist John Sykes and released two studio albums — 1989's self-titled effort and the 1993 follow-up, "Nothin' But Trouble" — before calling it quits.

Speaking at the NAMM show in Anaheim, California, Carmine said: "People wanna see [BLUE MURDER play again], but we can't get John out of the house."

He continued: "I saw John last year at the Heavy Metal Hall Of Fame, and he told me he was going out with Tony and this little kid drummer [Fred Boswell Jr.]. And he said, 'The kid wants to meet you,' and I met him. He said [his solo] album's coming out, and they're gonna tour. And I said, 'Good. When that's all done, then let's do BLUE MURDER.' He said, 'Okay.' Now, nothing's happened. It's been a year."

Tony went on to say that he speaks to John "regularly" and he explained that there have been "some issues" with Sykes's record label, resulting in a delay in the LP's release. He said: "There are so many dynamics to the story, but it doesn't have to be so complicated. He could just get out there and play music.

"I think one of the things with John is that he has a problem embracing the new business for what it is," Tony continued. "And it is different, and you do have to embrace it."

Carmine concurred, saying: "[John] was always more into the creative part, and the business part he always left to other people. And I know when we were together, he would always ask me, 'What about this? What about that?' So I'm sure he's having a problem embracing the business now. We all are, really, a bit. I mean, I can't believe the way the business is. I've seen it change from 52 years ago. So I'm sure that's part of it with John."

Upon Sykes's firing from the most successful version of WHITESNAKE, the former TYGERS OF PAN TANG and THIN LIZZY axeman set out to create a similar sounding bluesy hard rock band. BLUE MURDER released two studio albums and one live album before breaking up in 1994. The late Ray Gillen, most famous for singing for BLACK SABBATH and BADLANDS, sang for an early version of BLUE MURDER, and the band reportedly recorded demos with him, but he didn't appear on any of the group's albums.

Last November, Sykes announced that he had parted ways with Golden Robot Records, less than a year after signing with the Australian company. At the time, John accused the label of making "little attempt to move things forward despite our best efforts and patience."