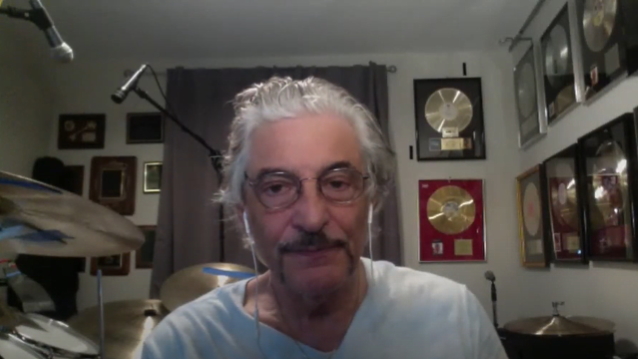 In a new interview with Radio Forrest, legendary drummer Carmine Appice was asked what he thinks John Bonham picked up from him in terms of his sound and playing style when VANILLA FUDGE and LED ZEPPELIN played together in the late 1960s. He responded (as transcribed by BLABBERMOUTH.NET): "According to the [John Bonham] book 'A Thunder Of Drums', I was one of his influences. So that means that he picked up a lot of the power that I use. 'Cause, basically, when you look back at the drummers who were influential and who were around inspiring people, it was Mitch Mitchell, Ginger Baker, Keith Moon and me and Dino Danelli. All the other four guys, they played light. I played really loud with a lot of power and showmanship. And when John saw me live, he loved it, and he loved my big drums. So he asked me if I could help him get a Ludwig endorsement.

"I mean, think about it — nobody knew him," Carmine explained. "It's hard to believe now. People say when I talk about it like I'm egoing out. I'm not really egoing out; I'm just telling the truth. Nobody knew John Bonham. And I called Ludwig and said, 'I think this guy's gonna be big. He wants a kit just like mine. It would be great if you give him an endorsement.' And on my word they did. And we sent them the first album, and on that they gave him an endorsement. He wasn't known yet. And then on the next tour, we did a lot of shows together, and he had the same exact drum set as me. And he was playing like me, he was doing the twirls like me, grabbing the cymbals like me. And he'd look at me when he did it, and we'd laugh. I'd give him a thumbs-up. We were friends. Me and [VANILLA FUDGE bassist] Tim [Bogert], on that tour, jammed with ZEPPELIN on one of the songs."

Back in 2014, Carmine said that he would love to play with a reunited LED ZEPPELIN, claiming that he is a better fit to replace Bonham than John's son Jason.

"Everybody in that band there is legendary… They're old school and legendary. Jason isn't legendary, and he's not old school," Appice explained to the "Totally Driven Radio" podcast. "He's John Bonham's son, but he don't play like John Bonham. He plays more… He plays like him. He's not John. He's got that name, but he's not John Bonham. I'm not John Bonham either, but I think my style might be close, 'cause I came first, and John listened to stuff I did and did it his own way. And we took 'em on their first tour. It's very close-sounding stuff in feel."

Carmine previously said that Bonham took the bass drum triplets from the VANILLA FUDGE song "Ticket To Ride", telling Classic Rock Revisited in a 2006 interview: "When I first heard John Bonham do that triplet thing on the bass drum, I went up to him and said, 'John, that is amazing. I have to admit that I took that from you.' He looked at me and said, 'What are you talking about? I took that from you!' I replied, 'I don't do that. You couldn't have taken it from me.' He proceeded to tell me where I did actually do that on the first VANILLA FUDGE record and he was right. I only did it for a moment on that album and he took it and made something bigger and better out of it."