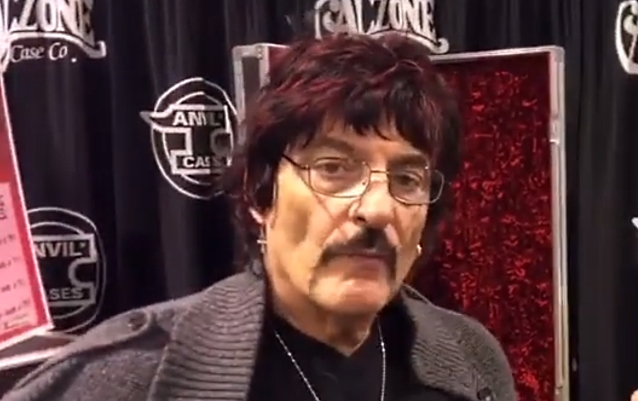 Legendary drummer Carmine Appice is still hopeful he can take part in a reunion of the power trio/supergroup BLUE MURDER. The band was by formed by guitarist/vocalist John Sykes and featured Appice and bassist Tony Franklin.

Asked by teenage radio host Miles "The Shoe" Schuman at this year's NAMM show why he isn't involved in Sykes's upcoming solo tour alongside Franklin, Appice said (see video below): "Well, because John wants to call it 'John Sykes' and not BLUE MURDER." Carmine went on to say that he isn't bothered by his exclusion from the trek. "I mean, it's not BLUE MURDER," he said. "He's gonna be doing John Sykes's new album. He might do one or two BLUE MURDER songs. He's gonna do WHITESNAKE [material]. He's gonna do THIN LIZZY. That doesn't really involve me."

According to Carmine, John originally approached him about playing drums on the upcoming tour, but they had a difference in opinion on how the trek should be presented. "When we talked about it and John said he wanted to do that, I said, 'Well, if we're gonna do that, we can do some of my history songs, which are as big as yours, or bigger,'" Appice explained. "But he wanted to call it 'John Sykes and BLUE MURDER.' I think it should just be 'BLUE MURDER.' Now he gets it. I talked to him the other day and I said, 'Look, we're gonna do some BLUE MURDER — some shows in America and Canada — and call it BLUE MURDER. But go do your John Sykes thing. Get it out of your system.' We're still friends. And hopefully, in a few months, when he gets all that done and he's out doing it and finishes it, we can do a proper BLUE MURDER reunion. He'll be out singing… He hasn't been out singing… Singing BLUE MURDER songs is not easy. And singing [WHITESNAKE] is not easy either. So he can be out there singing and playing and doing his thing. And then, hopefully when that's done, we can maybe do a BLUE MURDER thing."

Joining Sykes and Franklin on the upcoming tour will be drummer Fred Boswell Jr.

John's first album in nearly two decades will arrive later this year via Golden Robot Records. The as-yet-untitled disc (its previously announced title of "Sy-Ops" has now apparently been scrapped) is expected to include such tracks as "Dawning Of A Brand New Day", "Believe In Yourself", "My Guitar" and "Out Alive".