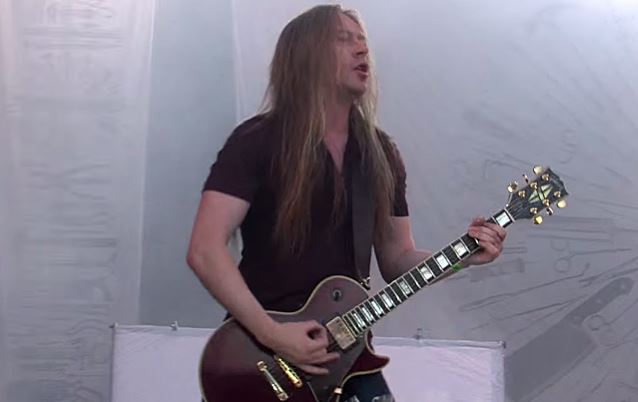 Guitarist Bill Steer of reactivated British extreme metal pioneers CARCASS tells Australia's The Rockpit that he hopes the band will be able to spend the next few months working on material for the follow-up to 2013's "Surgical Steel". "Personally, I'm keeping my fingers crossed a bit that things don't get too hectic [on the touring front], because it would be quite nice in between these [upcoming festival appearances we have scheduled] to get a little bit of work done regarding the next album," he said. "Down to myself, I've already been jamming quite a bit, but you don't like to force these things; you create when you feel ready. It's very early days on that one, but I think when you're doing festivals, you have the luxury of being at home for an average of four to five days a week. That's brilliant, but I think we want to make the most of that [and] actually get some work done."

Asked if he is still proud of how "Surgical Steel" turned out, Steer said: "I wouldn't use the word 'proud.' [Laughs] That's a little...I guess the best way of putting it is we're reasonably satisfied with it. The record represents where we were at that time. Of course, there's things we criticize about it, and that's only natural, and I think if you're 100 percent happy, there isn't much incentive to do anything again in the future. [Making] music for me is [about] always striving towards something, and you never quite get there, but part of the fun [is] to try something, and, I guess, at the end of it you kinda assess how close you got to what it was you wanted sonically. And with this thing, I would say we got reasonably close. And next time, if there is a next time, I guess we try and learn from any mistakes or whatever we picked up along the way."