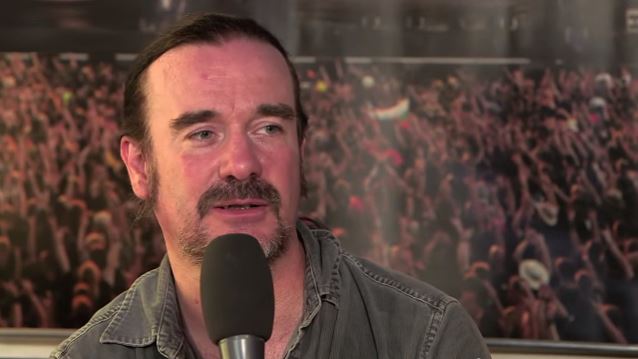 ARTE Concert conducted an interview with bassist/vocalist Jeff Walker of reactivated British extreme metal pioneers CARCASS at this year's Wacken Open Air festival, which was held July 31 - August 2 in Wacken, Germany. You can now watch the chat below.

Asked about where CARCASS gets its lyrical and musical ideas from, Walker said: "Where do we get our ideas? I don't know. It used to be books and movies when we were younger, but now it's a self-fulfilling prophecy, I guess.

"CARCASS has its own little world that it exists in.

"We could never write love songs or do metalcore breakdowns; that's not what we do.

"It's hard t explain. We have our parameters that we work in, and we just stick to that. We're like AC/DC — we know what we can and can't do. We're consistent.

"We're like Peter Pan, me and Bill [Steer, CARCASS guitarist]. We've never grown up. I mean, we're in our forties now, but we're still stuck in the mindset of when we were teenagers.

"I've never married and never had children, so I'm stil trying to live the teenage dream.

"I think we just look to the past and what influenced us when we were younger, and we can tap into that thing. Whereas people our age have moved on, matured. They're too busy paying the mortgage, wiping kids' asses. We don't have those problems.

"I don't eat meat, but I don't go around telling people not to eat meat. It doesn't work."

CARCASS' latest album, "Surgical Steel", sold around 8,500 copies in the United States in its first week of release to debut at position No. 41 on The Billboard 200 chart. The CD was released on September 16, 2013 in the U.K., September 13, 2013 in the rest of Europe and September 17, 2013 in North America via Nuclear Blast Records. The effort was produced by Colin Richardson (FEAR FACTORY, MACHINE HEAD, NAPALM DEATH, SLIPKNOT, BULLET FOR MY VALENTINE) and mixed by Andy Sneap (MEGADETH, ACCEPT, EXODUS, ARCH ENEMY).