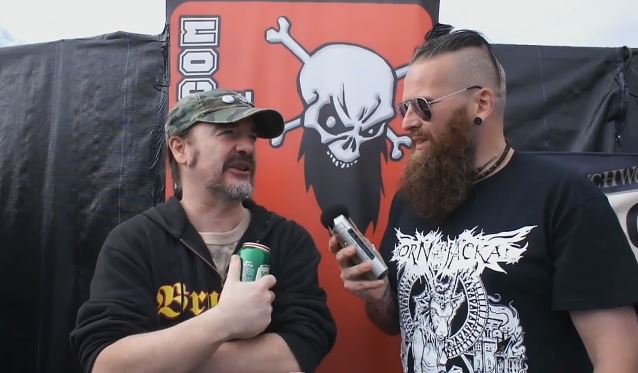 MikeJamesRockShow.com conducted an interview with bassist/vocalist Jeff Walker of British extreme metal pioneers CARCASS at this year's edition of the Bloodstock Open Air festival, which is being held August 7-10 at Catton Hall, Walton-On-Trent, West Midlands, United Kingdom. You can now watch the chat below.

In a recent interview with AndrewHaug.com, CARCASS guitarist Bill Steer stated about whether he has begun thinking ahead to the band's follow-up to last year's "Surgical Steel" album: "There's plenty of incentive there. Speaking for myself, I would love to do another record. I've heard Jeff [Walker, bass/vocals] say similar things, and I know Dan [Wilding, drums] would love to. We're just gonna take it as it comes, really, 'cause, obviously, we're still some way into our touring schedule. We're not really gonna be done with that until… I don't know… towards the end of November, I think. So we can't realistically even look at new material until December. We'll take it from there. All I know is we would the next record to be very strong indeed, so as long as it takes, that's all I can say. Not that I am anticipating a long time in the studio, but we'll spend as long writing as we need to. You get very conscious of the passing of time, especially when you're at the age that Jeff and myself are at, so you don't wanna waste your time, or the audience's, with something that is mediocre."