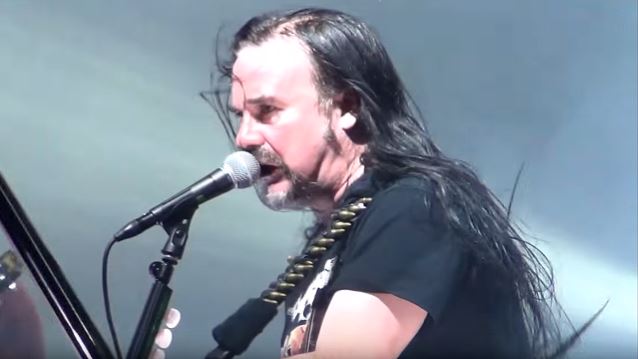 Metal Life conducted an interview with bassist/vocalist Jeff Walker of British extreme metal pioneers CARCASS in February. You can now listen to the chat below.

Asked about the progress of the songwriting sessions for CARCASS's follow-up to 2013's "Surgical Steel" album, Walker said: "Well, I could bullshit you and tell you that we've already written a double album, and it's a concept album. The truth of the matter is we've not had any time to sit down and regroup. I'm pretty sure Bill [Steer, guitar] has riffs somewhere, and maybe he's had a couple of jams with the drummer, but we've not sat down and started composing or writing stuff. We've literally had no time. We've not stopped touring or playing, on and off, since the beginning of 2013, before the album came out. We've just been busy. I mean, we were looking to wind down and then this SLAYER tour [offer] came up, and it [was] too good an opportunity to turn down. And as long as there's demand out there, we're gonna play."

He continued: "In all honesty, 'Surgical Steel' came out at the tail end of [2013], but it just seems like it was yesterday. We're not really in some kind of careerist cycle where we're gonna record albums, tour… If we were clever, we would get a new album out as soon as we can to capitalize on the wave of good feeling and the supposed success of 'Surgical Steel'. But that won't happen, because, as pretentious as it is, we're kind of artists and we'll take as much as we need to write the next album. Now, if that takes a year or two years, then it's just tough shit. And if that's to the detriment of any success or career that we've got, then it's just tough shit. It's not a money-spinning exercise."

CARCASS has scheduled 17 shows in the U.S. between its appearance at the Chicago Open Air festival in late July and the August 6 performance at the Heavy Montreal festival. Support on these dates will come from CROWBAR, GHOUL and NIGHT DEMON.