British extreme metal pioneers CARCASS have been forced to cancel their previously tour of Australia in the wake of the coronavirus (COVID-19) pandemic.

The promoter of the tour, Soundworks Touring, has issued the following statement regarding the matter: "Due to the very unfortunate circumstances surrounding the Download Festival cancellation and now the newly enforced government regulations, Soundworks Touring regrets to inform the public that all appearances on the scheduled CARCASS Australian tour have been cancelled.

"This has been an incredibly difficult decision to make, but one we now have no choice in.

"Ticket purchasers will receive a refund via point of purchase. We urge everyone to please be patient during the refund process. We sincerely apologise for all disappointment and inconvenience caused by these decisions made.

"We are 100% committed to rescheduling a headlining CARCASS tour to a later time frame when world health concerns settle."

CARCASS has set "Torn Arteries" as the title of its new album, due on August 7 via Nuclear Blast. According to guitarist Bill Steer, the name of the new CARCASS LP stems from a demo tape that the band's founding drummer Ken Owen recorded when he was still a teenager. "He had a fictitious band called TORN ARTERIES and he recorded everything himself in his bedroom — guitar, and he'd actually bang on boxes and kind of scream into the mic," Bill explained to Australia's Heavy. "And the whole thing was so distorted, it kind of sounded super heavy, even though essentially you were listening to a guy with a Spanish guitar and a couple of boxes. I think Jeff [Walker, CARCASS bassist/vocalist] appreciates the connection to the past and the fact that it was another Ken Owen classic. So that was his choice, really, and it stuck." 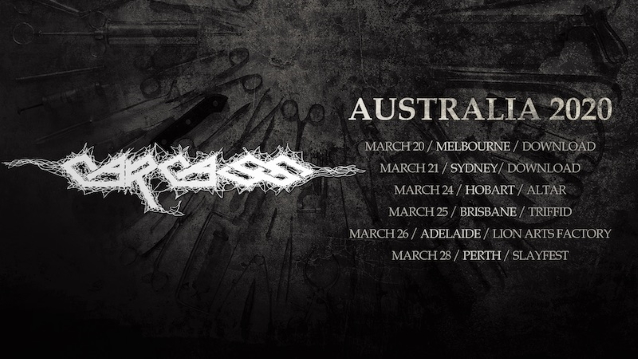