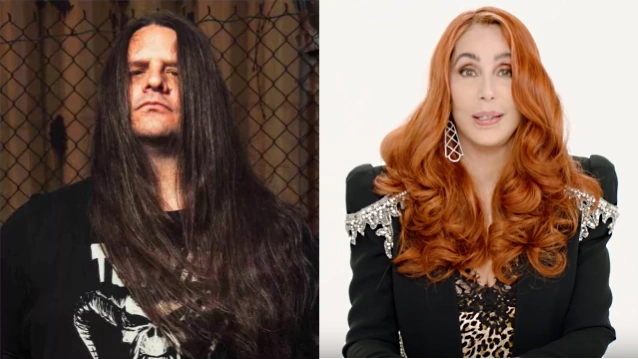 In a new interview with Metal Hammer magazine, CANNIBAL CORPSE frontman George "Corpsegrinder" Fisher revealed that he once got to hang out with the legendary singer-actress Cher at her Los Angeles mansion.

He recalled: "Cher's son Elijah, who is in the band DEADSY, is a big CANNIBAL CORPSE fan, and maybe 15 or 20 years ago, he wanted us to come out to L.A. and play his birthday party at the Viper Room. His birthday is two days after mine, so my wife and I went out a few days early: 'Let's just fly out there, hang around for a few days, then we'll play the show.'"

He continued: "The day before the show, Elijah invited us up to Cher's house. When we got there, she wasn't there — she was out shopping. I was like, 'Yeah, of course Cher's out shopping.' But I didn't know that she came back. I was talking to Elijah, and my wife starts hitting me on the arm. I go, 'What?' And she just whispers: 'Cher!' I'm like, 'Okay, that's cool, but it's not like meeting King Diamond or Chuck Billy,' 'cause I'm in awe of those guys.

"She was super-nice," Fisher added. "We're there and Cher is making food for us, and stuff. She came to the show as well. I apologized to her for having to listen to CANNIBAL CORPSE, but she was, like, 'No, I liked it.' I'm, like, 'Come on, Cher. Do the metal sign.' And she goes, 'Honey, I was metal before you were born.' I'm, like, 'Damn — I just got owned by Cher.'"

Cher famously dated KISS bassist/vocalist Gene Simmons in the late 1970s and early 1980s. In a 1979 interview with People magazine, Cher admitted that their relationship wasn't completely monogamous — she accepted the fact that Gene was fooling around on tour — but described it as "the best relationship I've ever had with a human being."