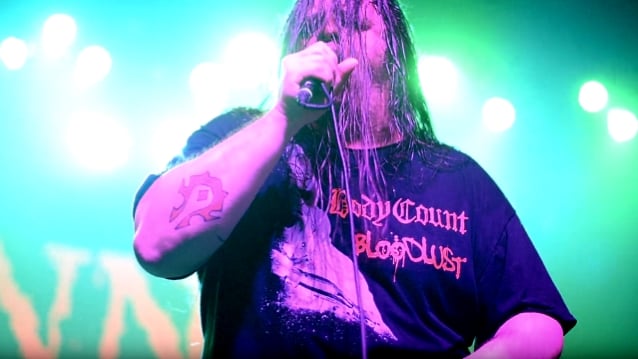 "Red Before Black", the new video from Florida death metal veterans CANNIBAL CORPSE, can be seen below. The song is the title track of the band's latest album, which was released in November 2017 via Metal Blade Records. The follow-up to 2014's "A Skeletal Domain" was recorded at Mana Recording Studios in Saint Petersburg, Florida with producer/engineer Erik Rutan (SOILENT GREEN, BELPHEGOR, HATE ETERNAL), who previously worked with CANNIBAL CORPSE on 2006's "Kill", 2009's "Evisceration Plague" and 2012's "Torture".

The "Red Before Black" clip is from the mind of horror FX veteran Doug Sakmann. The concept builds upon the world brought to life by Zev Deans in the previously released "Code Of The Slashers" video but adds significantly to the visual gore department. Sakmann shot the concept in Philadelphia, Pennsylvania and the live footage was captured by Jesse Davis in San Francisco, California. The video stars adult performers Nadia White and Talia Satana, as well as actresses Sonja Century, Kim Reo, and actor Alex Webster as the final kill of the video.

"Red Before Black" was edited by Metal Blade's own Vince Edwards and then meticulously processed by colorist/senior lead flame artist Luc Job (a pioneer in digital imagery for the last 25 years who has worked with directors David Lachapelle, Ridley Scott and Darren Aronofsky and clients like BMW, Dolce & Gabbana), who was all too happy to assist to bring the gratuitous bloodshed and gore to life for CANNIBAL CORPSE.

CANNIBAL CORPSE is currently on tour with SLAYER, LAMB OF GOD and AMON AMARTH.

Rutan made his live debut with CANNIBAL CORPSE at the opening show of the "Decibel Magazine Tour" on February 17 in San Antonio, Texas. He is playing with the band as the temporary replacement for guitarist Pat O'Brien, who was arrested in December for burglary and assaulting a police officer while his Florida home was in flames.