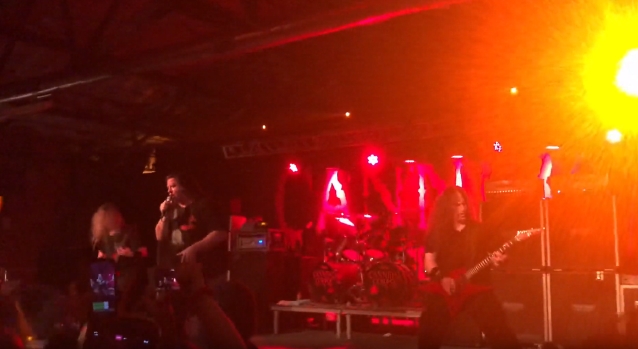 Erik Rutan made his live debut with CANNIBAL CORPSE at the opening show of the "Decibel Magazine Tour" on February 17 in San Antonio, Texas. He is playing with the band as the temporary replacement for guitarist Pat O'Brien, who was arrested in December for burglary and assaulting a police officer while his Florida home was in flames.

This isn't the first time these death metal powerhouses have worked together; Rutan has produced four albums with CANNIBAL CORPSE ("Kill", "Evisceration Plague", "Torture", "Red Before Black") and is uniquely equipped to fill the role — he is one of the death metal's most acclaimed guitarists and is known for his time as part of MORBID ANGEL (who are co headlining the "Decibel" tour alongside CANNIBAL) throughout the '90s and early 2000s, as well as handling vocals/guitars and production duties for his current band HATE ETERNAL.

Rutan told Metal Insider that he "found out right before the holidays" that he would be needed to step in for O'Brien. "So it's been a lot of work, obviously, to learn a headlining set with CANNIBAL CORPSE," he said. "But I've been working my tail off. I've been playing guitar eight hours a day and working with the guys. Everything's going great actually. I just learned the last song of the set, which I've learned 15 songs in three or four weeks, so I've really been working my ass off to make sure that, one, I know the songs. The good thing is, one, I've produced four CANNIBAL CORPSE records; two, I know all the records because I'm a fan of the band; and then three, these guys are like family to me. They're friends of mine for a long, long time. So a lot of the songs I already kind of knew in my head, but just not on the guitar. I just have to apply it. But I've been working my ass off because, obviously, Pat O'Brien is one of the best guitar players in death metal, in metal period, and a really good friend of mine, and all the guys are."

He continued: "I knew that when things happened that I might be needed, and if I was, I was gonna make damn sure that I was there to help the guys in every way I could, and also be the best I can to go out there and play my ass off because that's what I do. I play guitar. I've been playing guitar for 30 plus years, and I love doing this shit. I wake up. I work on CANNIBAL CORPSE songs. I go to bed thinking about CANNIBAL CORPSE songs. That's all I've been doing for the last four weeks. But I'm feeling good."

Rutan went on to say that it's "a very unique situation" filling in for O'Brien.

"Listen, if someone had said… I don't know how to describe the feeling actually, because I care about Pat and the CANNIBAL guys tremendously, and of course want what's best for them, individually, collectively, in every regard," he said. "And in this situation, I'm more than honored and proud to be able to play with CANNIBAL CORPSE and fill in for Pat, but, of course, my thoughts are on playing the CANNIBAL CORPSE songs. On my friend Pat, I will be thinking positive thoughts for him as well. It's a very unique situation for me. I'm excited, motivated, honored and concerned. There's a lot of emotion involved in this. The one thing I know is that I'm gonna go out and be at my utmost best playing these songs with CANNIBAL: touring with MORBID ANGEL, and then touring with SLAYER. It's kind of overwhelming a little bit. The whole thing is massive. I've been putting down and practicing my ass off, making sure that I'm on point. Anybody that knows me knows that everything I do I put 110 percent into it and certainly CANNIBAL CORPSE I'm doing everything I can to make sure that I'm honoring Pat O'Brien in the way he deserves to be."

O'Brien allegedly broke into a Northdale, Florida home on December 10 and shouted that "the rapture is coming" before pushing a woman to the ground. He ran toward a responding deputy with a knife and was subdued with a stun gun.

Less than half a mile from where O'Brien was arrested, a fire broke out at the house he was renting, sending flames billowing into the night sky from the roof. Fire marshals found a large cache of weapon, locked safes and potential explosive devices inside O'Brien's home.

The 53-year-old musician was released from Hillsborough County jail on December 14, after posting a $50,000 surety bond. 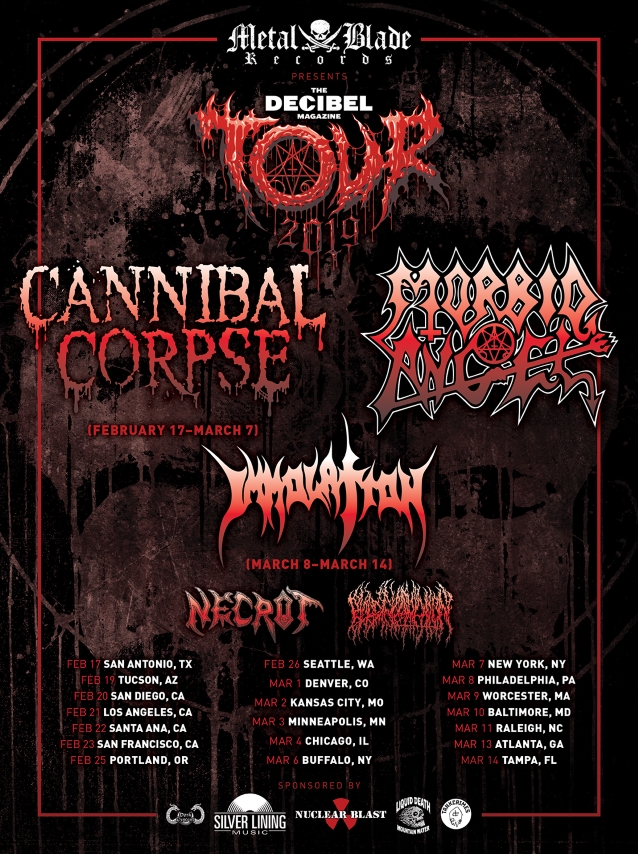