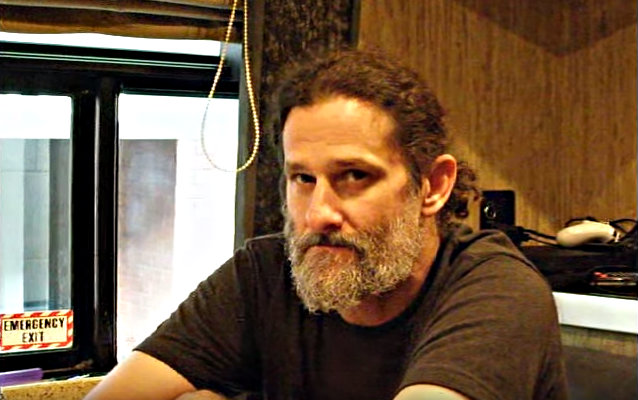 Metal Wani writer Dawn "Mama Love" Brown conducted an interview with drummer Paul Mazurkiewicz of Florida death metallers CANNIBAL CORPSE at a recent stop on the "Summer Slaughter" tour. You can now watch the chat below. A couple of excerpts follow (transcribed by BLABBERMOUTH.NET).

On whether it ever becomes difficult for CANNIBAL CORPSE to come up with new ideas:

Paul: "I don't think so. Otherwise, we wouldn't have thirteen albums out in a matter of almost thirty years. If we did, yeah, we'd be stuck on three albums, because we have no ideas. We're very creative people; when we have to create, we create. You don't wanna say it comes easy, but, obviously, when we put our minds to it, we're ready to do that. And then when we come up with material, there we go; we've got a record. And we have to do it in a confined time like that exactly, because if we were to wait… We're not METALLICA, we're not some band that can just take liberties and go, 'Yeah, we're multi-millionaires. We'll get to it when we get to it.' No. This is our job and our livelihood, and we have to keep this machine rolling to be consistent that way as well, so there's gonna be timeframes. I mean, right now, we don't have a set timeframe for the new record, but I can tell you, we're ending our cycle pretty much on this tour, and we're not gonna sitting around for a couple of years doing nothing. Of course, we're gonna start writing, getting some material together, and before you know it, we'll be recording. And that's the way we've always done it. But, yeah, aside of that, creatively, and just being an artist and all that, and not thinking of any of those things, we've got it in us. If we had an issue, like I was saying, we wouldn't have these albums out in a timely fashion the way we do… We're very fortunate that we have that creative energy flowing almost constantly, because it would really stink if we're done with this and we get there and we're all sitting around and going, 'Man, we've got nothing. None of us have anything.' Well, I guess that's when you know it's time to hang it up. But, luckily, that's never been the case."

On whether CANNIBAL CORPSE already has new material in the works:

Paul: "Eventually. Once we're done with this tour, it's pretty much the end of the cycle. We've got one more show at the end of October, but then, yeah, it's gonna [be time to start] getting material together for the next release. Hopefully sometime in 2017 we'll record it. But that's all to be determined probably within the next few months."